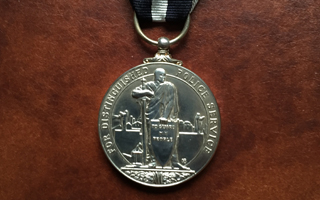 Officers across the country, alongside some outstanding civilian volunteers, have been honoured in the 2023 King’s New Year Honours list for their exceptional contributions to policing and victims of crime.

Of mention this year is Temporary Inspector, Mark Ruston, of Devon and Cornwall Police. Mark’s career has been a long and distinguished 26 years of service during which time he built his reputation for meticulous and respected policing.

Over the years Mark has led on many multi-agency responses to major incidents, working across events, operations and contingency planning in the Force, a critical role which without a good lead can prove hard to navigate. Mark has proved himself a great lead, and in recent years was key in planning for the G7 World Leader’s Summit which took place in June 2021 and was the largest and most complex event ever undertaken by Devon & Cornwall Police.

Mark says, “I am immensely proud and overwhelmed to have been awarded an MBE in His Majesty King Charles III first New Year Honours and I would like to thank those who nominated me. There are so many colleagues who I have worked alongside for 26 years who are just as deserving of such recognition because policing is delivered by teams, not individuals.

“My recent contribution to the safety and security of the G7 Summit in Cornwall was a career highlight and personally my most significant challenge yet, but our teams and the Force came together, as we do so often across Devon and Cornwall, to safely deliver the event whilst maintaining business as usual.”

During the G7 Summit, Mark coordinated a team of advisors and worked across government and partner agencies bringing them together to focus on security whilst continuing to explore all opportunities and innovative ways of working. He chaired the G7 security tasking group ensuring a mutual understanding of roles, needs and requirements working with partners and building relationships to resolve different approaches to risk and threats. Mark also ensured the security plan could be delivered coherently to other strategic and tactical plans.

Assistant Chief Constable Glen Mayhew QPM said: “We are immensely proud of Mark’s achievement and would like to take the opportunity to wish him congratulations for his MBE which is a deserved reflection of his police career. Widely respected and liked by his colleagues, he has played a vital role in contingency planning for the Force for many years and was instrumental in the successful policing of the G7 Summit.  Without doubt his pragmatic approach to security planning, combined with his commitment to work with partners and our communities was absolutely key to delivering the event safely.”

After over 50 years of service, Marjorie Black is awarded the Medal of the Order of the British Empire (BEM), for her loyal and dedicated service to police and helping local communities within West Yorkshire.

Majorie remains a great ambassador for the force, having been instrumental in the mentoring, training and support of many colleagues. Marjorie said: “It is a real honour, but for me, this is recognition for all the people I work with in my team.”

West Yorkshire Police Chief Constable John Robins QPM DL added: “Very few people give such an incredible amount of their lives over to public service and this award is extremely well deserved. I congratulate Marjorie and thank her for all that she has done for us and continues to do.”

Outside of the regular policing duties, it is heartening to see Richard Fox, Musical Director, Metropolitan Police Choir and Police Constable, Metropolitan Police Service, receive recognition for his work and be awarded a Medal of the Order of the British Empire, (BEM).

Richards notes, “The choir enables the Met to reach places and people it otherwise may not. The Met has a rich tradition of choral singing and to be able to be part of that legacy and continue that musicianship is a privilege. Being nominated for this award is truly remarkable and leading the choir musically, an honour. I would like to thank the choir in its entirety for their support, commitment and drive to continually making the choir as successful as it can be.”

Of note this year from civilian contributions is Bryndon (Bryn) Hughes, whom we would like to congratulate formally on his MBE. Bryn has worked tirelessly in setting up the PC Nicola Hughes Memorial Fund in honour of his daughter Nicola who was killed in the line of duty. He is also a consultant on the Victims Advisory Panel for the Ministry of Justice and works closely with PFEW to drive forward the Medals for Heroes campaign and is a well-deserved recipient of the honour.

Steve Hartshorn, National Chair of the Police Federation of England and Wales, said: “I would like to congratulate those individuals who received an award for their extraordinary achievements. To be recognised in the first round of honours from His Majesty the King is an enormous privilege.

“Our colleagues work under enormous pressure, and the recognition for police officers, staff and volunteers on the list below sets an example to us all and highlights the positive impact of the police service.”

Members of the Order of the British Empire

Members of the Order of the British Empire