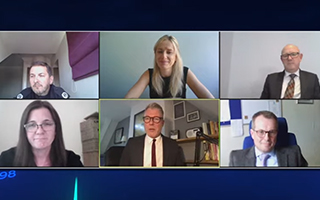 More must be done to break down the stereotypical views on a career in roads policing to make it more appealing to new recruits.

“I think for a long time we’ve focused on the core elements of training and the law side of things. Let’s show a bit of passion and show our new recruits coming through early on the other aspects of roads,” she said.

“There is acquisitive crime, organised crime gangs, different kinds of units such as ANPR that are targeting real specific crime types and trends and supporting neighbourhood policing. Let us show them it is not just some of the stereotypical views held for a long time about roads policing.

“Our new officers are the future and will be delivering roads policing in five, 10 or 15 years to come.”

Gemma added it was positive to have members involved in today’s conference for the first time and for them to witness the commitment to roads policing.

“PFEW appreciates the spotlight, but we have to see positive outcomes. We are really pleased to see things in place, it cannot stop there though,” she concluded.

He said: “The Government is making noise about supporting police through the 20,000 uplift – but there is no guarantee this reinvestment will go into roads policing.

“I would like to see people putting their money where their mouth is.

“Many years ago, there was a time where the roads policing budget was protected. I question whether or not we need to go back to a time where that budget is protected so chiefs don’t have a choice where to spend it.”

One suggestion raised is a model akin to the British Transport Police where roads policing is completely protected and has its own budget.

“PFEW needs to take a huge amount of credit for keeping roads policing on the radar over the last 10 years. It’s really, really valuable and generates that noise with the government and they are starting to listen”, he said. “I am incredibly optimistic, and we are definitely making progress.”

NPCC Roads Policing Strategic Business Manager Dean Hatton added: “I’ve been on the roads policing agenda now for more than five years and I have never sensed a greater anticipation. Now it’s about turning that into action.

“We all want to pull in the same direction, and I think that is what is happening for the first time. I am really confident we will start to see some progress over the next three to 12 months. I think the future is bright for roads policing.”

A cautiously optimistic Dr Helen Wells, Director of the Roads Policing Academic Network, commented: “We need to come back to whatever forum next year to talk about what has been delivered. But I have never seen so much energy in the roads policing landscape which is really positive.”