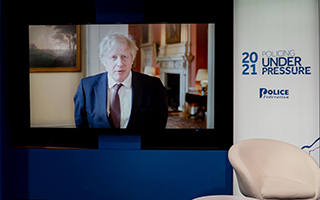 Following a short opening address from Mr Apter at the two-day virtual event, Prime Minister Johnson thanked members for saving lives, protecting the NHS during the pandemic, and reflected on an exceptionally challenging period for policing and himself.

In a pre-recorded message the PM said: “A huge thank you to our incredible policemen and women for the work that you’ve done to keep people safe during this awful pandemic. You’ve encouraged people to stick to the rules, at the same time as you have been fighting crime, and you’ve each risen to an enormous challenge.

“Just as I could never have imagined being forced as Prime Minister to close pubs and bars and restaurants, tell people how many households could get together, I bet that policing restrictions in that way was not something you ever dreamt you would be doing.

“But you did it because you knew it was how we were going to protect the NHS and save lives.”

The Prime Minister pledged that he would deliver the Government’s policing Covenant to make sure police officers and staff ‘get the respect and support they deserve.’

He also vowed to continue to provide funding to tackle crime and ensure the Police Uplift Programme stayed on track, and promised that the new Police, Crime, Sentencing and Courts Bill would help police deal with major social disruption and result in longer sentences for offenders who assaulted emergency workers.

In the address to Conference, Prime Minister Johnson added: “And now as we move closer to normality and get on with cracking down on crime, we want you to know that we’re going to be backing you all the way, providing millions in funding to tackle serious violence and drugs gangs, giving you the manpower to get the job done.

“Already we’ve 8,771 new recruits signed up, meaning that we are 44 per cent of the way towards our target of 20,000 additional police officers by 2023. And supporting you through the Police, Crime, Sentencing and Courts Bill with new powers to deal with highly disruptive protests, greater powers for stop and search, doubling the maximum sentence for assaults on emergency workers, and making sure that serious violent and sexual offenders spend longer behind bars.

“We will deliver a new policing Covenant to make sure our police officers and staff get the respect and support they deserve. You’ve shown over the past year just why British police are the best in the world.

“Now we’re going to make sure you have the tools you need to deal with criminals, make our streets safer, and get on with the job you signed up to do.

“I wish you every success with the 2021 Police Federation Conference.”

Mr Apter opened the Conference by admitting he’d rather be meeting members in person. He said: “Although we’d rather all be in one place – this virtual conference will be the same as every other. There’s so much in the agenda – I’m excited and it’s a good agenda. It will be a good conference.”