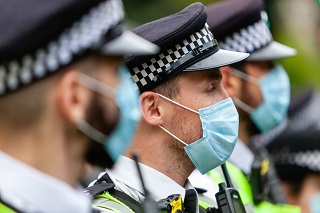 A report published today by Her Majesty’s Inspectorate of Constabulary and Fire Services (HMICFRS) says the police service responded with “dedication and commitment” to the challenge of policing the Covid-19 pandemic.

Based on an inspection of policing between March and November 2020, the police watchdog said, “policing demonstrated its capacity for responding in an emergency.” And took “immediate and decisive” action to respond to the extreme circumstances of the pandemic.

Inspectors found that the fast-paced introduction and subsequent changes to new legislation affected some forces’ ability to produce timely and clear guidance for police officers and staff which created difficulties for officers on the frontline.

The inspectorate acknowledged the criticism some forces faced for their interpretation of lockdown restrictions and stated they were “assured that police forces had learnt from these instances” and in general “did well” to maintain public trust.

Reacting to the findings, National Chair of the Police Federation of England and Wales John Apter, said: “It’s good to see that this report recognises the commitment and professionalism of my colleagues, who have done their absolute best during this challenging time.

“Officers have been expected to police in a way that is completely alien to them, dealing with rapid changes in legislation, while at the same time being subjected to repeated and unfounded criticism.

“In normal times policing is complex and challenging enough. However, during this pandemic the additional demands and pressure on officers has at times been intolerable. Despite this my colleagues have done themselves proud in the way they have adapted to an entirely new way of policing; it is, therefore, good to see that this report recognises that.”