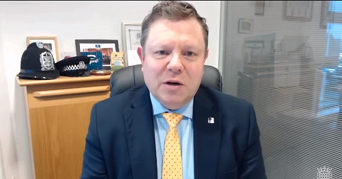 The National Chair of the Police Federation of England and Wales has told a Select Committee that ‘at the height of the pandemic’ public demonstrations posed a significant health risk to police officers and members of the public.

Giving evidence to the Joint Committee on Human Rights (JCHR), on 24 February, John Apter told MPs and Lords he fully supported 'the right to peaceful and lawful protest’ but said policing these events had been extremely difficult for officers.

During a two-hour-long remote hearing which examined human rights issues during the pandemic, including the right to protest, Mr Apter told Committee members about the severe challenges police officers faced at public demonstrations.

Mr Apter said: “In a minority of protests individuals have turned to violence with my colleagues, who are doing all they can in the midst of this deadly virus, up close and personal with people. Many of them are weaponising the virus by spitting and coughing at them. We have seen a significant increase in that disgusting, vile and dangerous, type of attack.

Responding to the question about the right to protest from Lord Singh of Wimbledon, Mr Apter added: “In order to protect my colleagues and the public I do feel, at the height of the pandemic, there should have been more restrictions on protests, as difficult a message as that is.”

Bringing the session to a close, the JCHR Chair, Rt.Hon. Harriet Harman QC MP, thanked frontline officers for all they are doing to keep the public safe during the pandemic.