PFEW must strive to become the ‘unequivocal voice of policing’ 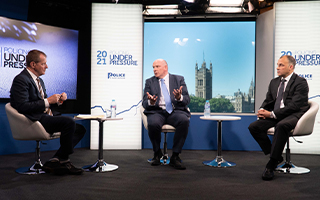 PFEW must be allowed to take part in a more meaningful pay and pension arbitration processes with Government so the Federation is allowed to participate on equal terms.

Alex Duncan, PFEW’s National Secretary and John Partington, Deputy National Secretary both admitted the Federation had some work to do in positioning themselves nationally in a ‘Pay, Conditions and Pensions Update’ at PFEW’s Annual Conference 2021 today (9 June). The session was facilitated by PM Tony Blair’s former spokesman and recent GMB host Alastair Campbell.

After being asked where he saw PFEW in years to come, Mr Duncan said: “As we come out of the pandemic and we return to normality, I think it’s beholding on PFEW to be the unequivocal voice of policing. We need to get our message out more – we will all have different opinions, but it’s important we rally together.”

Agreeing with the National Secretary, Mr Partington added that: “We have to realise how powerful we can be when we come together with a united front.”

Both PFEW representatives discussed the compensation claim against the Government on behalf of members who were victims of discrimination and suffered any ‘injury to feeling’ as a result of the changes to members’ pensions by the introduction of the 2015 scheme.

The claim – lodged by law firm Penningtons Manches Cooper in December 2020 – is to ensure those who had not submitted a claim in respect of pension discrimination are considered for any compensation the court considers appropriate for the distress caused by discriminatory changes.

Mr Duncan admitted the issue of pensions was the number one topic of discussion for most members. He added: “There are members out there now who don’t know when they will retire or what they are entitled to. They are paying a lot of money - it’s roughly half of serving police officers who will be impacted.

“We are working with Government as part of a Consultation process to get the best outcome for members. We have put a lot of pressure on the Home Office.

“I think they want to resolve it because it is incredibly complex. I think there is a genuine desire to do it – but you can understand why members are extremely frustrated.”

Both were also critical of the Federation’s role in setting police pay via the Police Renumeration Review Body and called for Government to grant PFEW more of a proper negotiating role.

Mr Partington said: “We put a lot of evidence forward each year – the Government can choose to ignore this. We negotiate the best we can, but it’s a very complex arena. There is evidence of officer going to food banks. It’s not right for the job they do – they should be given the right amount of pay. We put our arguments forward backed by evidence, but we always seem to be overlooked. The fact is that morale is decreasing all the time.”

Mr Duncan explained how PFEW’s role was being wrongly diminished by the refusal of Government to allow any appeal or arbitration when PFEW’s annual pay claim is assessed by the Pay Review Body.

The issue of further industrial rights was raised by Mr Campbell and brought a direct response from the National Secretary.

But Mr Duncan admitted: “We have to be careful what we wish for. You don’t hear about all out strikes where it ends well. I don’t see it as an attractive option – the bigger win for us is meaningful negotiating rights – and an independent arbitration process.”