Attendees from England and Wales heard from a wide range of expert speakers at PFEW’s Women’s Network Seminar in Leatherhead. 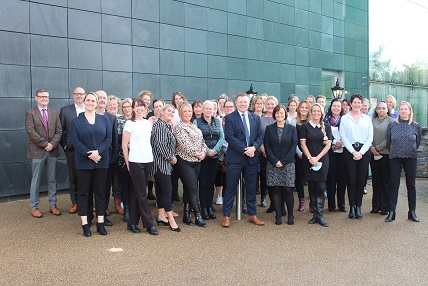 The first day of the event, organised by PFEW’s national Women’s Group, focussed on misogamy, domestic violence, sexual harassment, and the possible discrimination of police fitness tests – particularly for some female colleagues.

Opening the conference, National Chair John Apter acknowledged female staff within policing were treated differently from male counterparts and said: ‘There badly needs to be a restart.’

“Following the horrific murder of Sarah Everard we can’t put this down to just one bad apple. However, around these difficult issues we also need our leaders to be more visible.

“Misogyny is not just a problem for women, it's a problem for us all. If we remain silent in the face of such negativity, we are failing each other.”

Guest speaker, Professor Louise Mullany from the University of Nottingham discussed the issue of misogyny and the power of language.

Professor Mullany, a respected linguist, said ‘banter’ and jocular abuse were extremely damaging in the workplace, and asked delegates to call out colleagues who overstepped the mark. She added: “When it goes too far, and you see it, then please call it out. You can’t change everything by language because sexism is so powerful. When something is misogynistic, you ideally need men to help champion the cause of women, because this is also very important.”

PFEW’s Women In Policing Award winner Chief Inspector Sharon Baker explained how a Force-only video initiative, where she told her own harrowing story of domestic abuse, led to 50k views on Facebook. She said: “Nothing prepared me for the response, including 138 members of staff who came forwards after my video.

“When I discovered only 20 per cent had reported domestic abuse, it showed me what we still had to do. The most common comments I heard were about shame and embarrassment, and that’s why I am so passionate about working on behalf of victims within policing.”

In a session featuring Sussex Police’s Brooke Jarvis, Louise Crawford and Chief Constable Carl Foulkes, delegates heard about sexual harassment issues, and how to positively change the narrative around the subject.

The trio told how Sussex and Surrey Forces had signed up to the global ‘commit to gender equality’ initiative HeForShe. They also discussed the progress being made in encouraging and mentoring talented women who were in danger of missing out on promotion options through a lack of confidence, and other gender-based issues.

Chief Constable Foulkes said PFEW had a ‘huge part’ to play in supporting and challenging behaviours within policing and added there was still work to be done on gender imbalance.

He said: “We still have too many female colleagues, who don’t feel they can be police officers and look after children.”

In the final session of the first day, PFEW National Board member Ian Saunders discussed a PFEW initiative, to ensure fitness tests are not discriminatory.

He said: “How many women don’t return from maternity because they know this is waiting for them?”

He outlined that PFEW wanted to ensure fitness tests were ‘about what is required for the job,’ and not about institutional sexism.

He added: “We don’t have an issue with suitable fitness tests for particular roles, but for some women they are seen as a threat hanging over them, and this affects their career. This needs to change.”

On day two, delegates heard the powerful testimony of former firearms officer Rhona Malone, who won an employment tribunal against Police Scotland due to victimisation.

Rhona explained how she felt ‘humiliated, embarrassed, and ashamed’ when she lost the job she loved doing.

She added: “I loved being a police officer and really miss it. But now I really want to empower people to stand up and speak out.”