Officers need to be allies of underrepresented groups 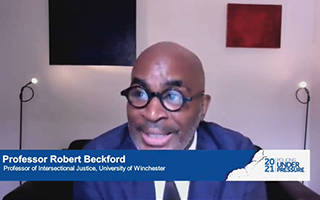 In a fascinating session during Annual Conference today (10 June), Professor Robert Beckford of Winchester University discussed what must happen for policing to get to grips with inequality.

The BAFTA Award-winning broadcaster started the session by saying his interaction with police officers as a black man has been positive, but added: “Sadly, our society is one of the most inequal in the western world.

“Even in the controversial Sewell race report, it acknowledges privilege unchecked has financial and also economic consequences in Britain.”

Zac Mader, PFEW’s Black Asian Minority Ethnic & BAME Belief Secretary, asked if more could be done within policing so there was an improved understanding of privilege.

Professor Beckford replied: “It is about talking about it. Part of the problem is it is not talked about. We need to talk and reflect upon it, to see how we can help in certain circumstances.

“Radical honesty is necessary to address these problems in institutions and organisations. In society we find a way to deny things exist, but we need to be completely honest so we can move forward.”

When asked what members can do to help tackle this issue, he said it is about self-education, adding: “Think about how you can be an ally and support underrepresented groups to ensure there is a real fairness. The fairness we want to see in public institutions and public life.”

He explained improved training and hard questions with honest answers were needed to tackle bias and inclusion when it comes to the service selecting officers for promotion. “For many years it was the white male with grey hair,” he added.

As of the end of March 2020, just 4.3 per cent of senior officers were from Asian, Black, Mixed or other ethnic groups.

“Really clear and powerful pathways” for underrepresented officers when it comes to career progression must be introduced to help improve an imbalance so the service can better reflect the communities it protects, the professor concluded.

Professor Beckford has made a multitude of successful documentaries for the BBC and Channel 4 focussing on the intersection of race, class, gender and the social and religious environment.