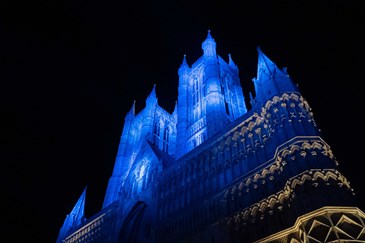 One of the most poignant occasions in the UK policing calendar took place today, Sunday 26 September at Lincoln Cathedral.

The 18th National Police Memorial Day honoured those police officers who have made the ultimate sacrifice protecting and serving their communities. The event was founded in 2004 by retired Sergeant Joe Holness to commemorate the memory of colleagues lost in the line of duty, it followed the death of his colleague, fellow Kent officer Police Constable Jon Odell, who was killed in December 2000 after a vehicle was driven at him.

Reverend Canon Wilbraham led the service, attended by family members, police officers and government officials, he said: “National Police Memorial Day exists to pay tribute to the brave men and women who gave us their all; long may we remember them and their sacrifice. I hope that the service provides comfort and reassurance that their legacy will live on. We are grateful for your ongoing involvement and support.”

John Apter, National Chair of the Police Federation of England and Wales said: “National Police Memorial Day is an incredibly important day in the policing calendar. It’s a day to remember those colleagues we have lost and to ensure they are never forgotten. Policing is a family, and when we lose a member of our family the pain is felt far and wide. The National Memorial Day is a time to reflect, pay tribute and remember. It is so important, especially to the families, friends and colleagues of those we have lost, that their loved ones will never be forgotten.”

The Rt. Hon. Home Secretary Priti Patel gave a reading during the service and Dame Cressida Dick, Commissioner of the Metropolitan Police Service, gave the address.

As a show of support, public buildings around the UK were illuminated blue to mark the occasion, including numerous police HQ buildings.