Motorways are dangerous and unforgiving places at the best of times. Anyone who has been forced to retreat on to the hard shoulder knows that reality. 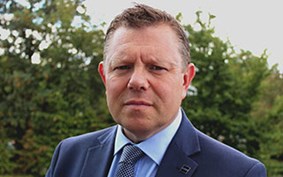 From a static position by the side of the road, one is only too aware of how the traffic roars past with a thunderous intensity, creating a profound sense of vulnerability.

As a police officer who spent many years of my career on the motorway network, I too am acutely conscious of these dangers.

Like so many of my experienced colleagues and other professionals in the emergency services, I often found my own security tested to the limit in dealing with accidents caused by excessive speed, engine failure, driver error, poor weather or carriageway obstructions.

But the inherent risks of motorways are greatly heightened when successive governments decide through a deliberate act of misguided policy to remove one of the essential safety valves from some of the busiest parts of the network.

That is precisely what has happened with the creation of so-called 'smart motorways', where the hard shoulder is removed to create an extra live lane, with the aim of easing congestion.

Never has the word 'smart' been more misused. Given their disastrous record, the term 'lethal' might be more appropriate.

Author George Orwell once wrote that political language 'is designed to make lies sound truthful and murder respectable and to give an appearance of solidity to pure wind'.

He could have been writing about the destructive enthusiasm of politicians — from all parties — for this ill-conceived, faddish experiment in road transport, which has achieved the exact opposite of its stated purpose.

Not only have smart motorways failed to reduce journey times, as their architects predicted, but they have added a deadly new dimension to car travel in Britain. That sorry truth has been reinforced through the in-depth investigation by this newspaper, led by journalist Susie Coen, whose undercover reports from inside a control room of the National Highways Agency yesterday exposed a catalogue of catastrophic failings in the smart system, from non-functioning cameras to faulty computers.

Today, the Mail exposes failures in the radar system integral to smart motorways.

This is so important because at the heart of these new motorways is meant to be the use of innovative technology and sophisticated communications to negate the impact of the hard shoulder's removal.

In theory, vehicle breakdowns will be swiftly spotted, enabling assistance to be provided, speed limits lowered in the vicinity and advice issued to other motorists.

Such is the apparent confidence in this approach that the Government has even boasted that 'smart motorways are as safe or safer than conventional roads'.

But those words could not be more empty. As the Mail's inquiry shows, broken promises are matched by broken technology. Because of this inadequacy, motorists can find themselves in a stopped vehicle in a live lane, with the authorities knowing nothing about the incident.

All too often, the control room operators are reliant on software full of glitches and devices which are unable to transmit images. According to the Mail's audit, carried out on September 17, more than one in ten safety cameras were broken, misted up or facing the wrong way. Even more worryingly, half the cameras on one of the busiest sections of the M25 were faulty.

This paper's investigation reinforces all the warnings that my own organisation, the Police Federation of England and Wales, has given for years. I have spoken to many police officers who tell me that they do not feel safe on smart motorways, not least because of the unreliable technology.

The hard shoulder has always been a place of refuge — albeit a somewhat precarious one — and its disappearance leaves both motorists and emergency services more exposed than ever. That is why, in the past, I have called smart motorways 'a death trap' and have described their introduction as 'a recipe for disaster'. Those claims are backed up by hard evidence.

In the four years to 2019, 53 people have been killed on smart motorways, making a mockery of the official claims about enhanced safety.

In 2019, the death rate on the smart sections of motorways was 8 per cent higher than on conventional roads. The AA is reportedly so concerned that last year it ordered its recovery crews not to stop at breakdowns on smart motorways.

As the Mail reports today, the Prime Minister has ordered an inquiry into the failings revealed in the paper's investigation. But what we urgently need is a full review into what has gone wrong so lessons can be learnt.

This should be accompanied by a pause in the expansion of the smart network until all the technological difficulties are resolved. No airline would dream of putting a plane in the skies without being sure that all the cockpit and ground control systems were working properly.

The same should apply to motorways, yet the Government has always seemed to be determined to press on, regardless of the deepening concerns.

Given the anxieties of the police and the public, the logic behind this insistence is incomprehensible. Whatever the reasons, ministers are continuing with the £6 billion roll-out of the scheme.

Already, 50 sections of the network have been converted to 'smart' operations, covering 375 miles, including much of the M1, M25 and M6. By 2023, it is planned to convert another 350 miles, a statistic which will cause many motorists to shudder.

If the original concept of smart motorways had been retained, that idea would not be so disturbing.

When the first trials were launched around 2006, the use of new technology was accompanied by the pledge that, in the absence of the hard shoulder, there would be safety lay-bys at 500-metre intervals, as well as closely spaced gantries that would provide traffic information and guidance.

Those three elements seemed to hold out the prospect that smart motorways would be a success — in fact, trial data showed a significant drop in the accident rate on the new sections, prompting then Labour Transport Secretary Ruth Kelly to claim that safety fears 'haven't materialised at all'.

But it is a very different story today. The vital technology on which the scheme depends is not working, as highlighted by the Mail's report: when a manager says in despair 'everything's breaking' as the control room's computers fail, and when an operator declares, 'We've got no signals, you're all going to die.'

Nor have the safety areas at 500-metre intervals been created. On some sections, the gap goes on for miles, with the result that a broken-down vehicle may have to sit in the live lane with speeding traffic coming up behind — a nightmarish scenario that has been fatally enacted for too many bereaved families.

And an insufficient number of signal gantries have been built, so motorists are left ignorant about what obstructions lie ahead.

Urgent change is needed if more loss of life is to be avoided. If the Government is unwilling to make the vital improvements required, this sorry experiment should be drawn to a close.