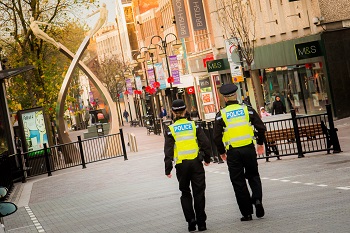 The new bill which will allow special constables to be protected by the Police Federation of England and Wales (PFEW) has demonstrated the positive shift in the way the role is now viewed.

Special constables may have been around for more than 200 years, but they have never been represented fully and have had very little legal protection despite facing the same threats as regular officers.

After almost 10 years of campaigning by the Federation, the Police, Crime, Sentencing and Courts Bill was finally laid before Parliament this month and passed its second reading on Tuesday (16 March).

Welcoming the progress, PFEW Special Constabulary Lead Dave Bamber, commented: “After campaigning for Specials to be able to join the Federation for almost a decade, we are delighted the bill has finally made the first wrung of the ladder.

“I am also glad the perspective of Specials has changed for the best over the years, and they are seen as an essential part of the service. The impending change in law shows there is an acceptance that wasn’t there in the past.

“At PFEW, we very much look forward to influencing, negotiating, and persuading on their behalf and making sure their voices are loudly heard.”

Joining more than 130,000 rank and file members, Specials will be able to receive support and advice from elected workplace reps who have received full PFEW training on Police Regulations to ensure they are properly represented - should they face issues. This will form part of the support package to ensure they know their rights and entitlements and means they will receive the right support if any workplace issues are encountered.

Specials will also be able to call on the expert services of Fed reps during performance and misconduct proceedings and receive top quality advice and legal representation throughout.

As Federation members, Specials will for also the first time be able to make Criminal, Misconduct and Civil applications for legal assistance should they need it. Membership will also give access to a host of benefits from a range of affiliated providers who offer discounts on financial, health, travel, legal, home, vehicle and telecoms products and services.

Special Constabulary Lead Dave Bamber, continued: “Our selfless Special Constables face the same dangers as the regular colleagues they work alongside and dedicate thousands of hours, while working for free to protect the public.

“They have played a vital part in assisting during the pandemic, stepping in to help when officers and staff were off sick or self-isolating from Covid-19.

“Nobody has ever really fully represented the Special Constabulary regarding regulations or formal negotiations. Nobody has been on the side of Specials during conversations with key decision makers - and now the Federation will be. It is a really proud moment for the Federation and a historic move.

“It is only right Specials receive the same legal protections, support with workplace grievances, and negotiations over conditions, as their regular counterparts.”

In the November edition of POLICE Mag, Derek Hopkins, Deputy Chief Officer within the Essex Special Constabulary who has been a special for 40 years, commented: “Specials were regarded as hobby bobbies back in the day, but they are very much embedded into frontline policing now. We are a core part of the policing solution and we are not just an afterthought.”