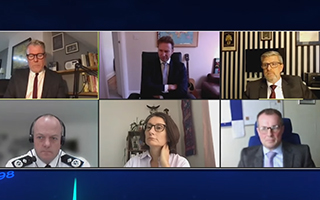 The Independent Office for Police Conduct (IOPC) and legal experts agree with the Federation it is crucial the Police, Crime, Sentencing and Courts Bill currently passing through parliament to protect police drivers is amended as it still leaves them, and the public, at risk.

But he warned the Police, Crime, Sentencing and Courts Bill in its current form could restrict an officer’s ability to keep the public safe.

“An officer may find themselves driving outside of their training, we have all done this for the right reasons, to keep the public safe,” he explained. “It means that driver may perform a maneuver which is not tested or approved and likely to fall within the definition of careless or dangerous driving.”

PFEW is pushing for a reasonableness defence clause in the bill to give officers flexibility to act instinctively to assist the public in the many varied situations they face.

“We can’t train for every situation, but we still expect them to act, and expect that to be recognised within the legislation,” he added.

“More importantly, they need to use their good judgement to keep the public safe, rather than thinking they have to stand impotently by because their training doesn’t cover what they are about to do.”

Steve Noonan, Directorate of Major Investigations at the IOPC agreed with the PFEW’s stance.

“The IOPC is very much on the same page as the Federation. Police officers should be able to respond to emergencies without the fear of these repercussions, he said.

“Police drivers have a difficult job which they do while balancing public safety.”

He added the IOPC is concerned with the law as it currently stands, as it is unclear and open to interpretation.

“Once it comes to us, we are in the position of exercising discretion and have to deal with what is in front of us and refer to the CPS. There is a real opportunity with this legislation to remove a lot of the ambiguity that currently exists.”

“I foresee real risks for drivers and ultimately real problems if there isn’t an amendment.” he warned.

He added, “offenders will always aim to drive in a way that requires the officer(s) the abandon the pursuit.”

Our tabled amendment, which has already gained cross-party support, will now be taken forward to the committee stage and will be discussed in detail by the House of Lords.

In the future, if a police driver is investigated for their standard of driving, subject matter experts, which will be credible driving instructors, will help in the legal process.

Deputy Chief Constable Terry Woods, National NPCC Lead for Police Driver Training explained over the next month Subject Matter Experts will be trained to form a cadre to make independent assessments of any issues.

DCC Wood, who thanked PFEW for its work on putting improvements to police driver training and protections on the agenda, added, officers need to “keep an eye on” their courses and “stay up to date”.

“We all need to focus and concentrate to claim protection or exemptions. That’s an organisational and personal responsibility.” he concluded.