His Royal Highness The Prince of Wales led the dedication ceremony for the UK Police Memorial at the National Memorial Arboretum today at a ceremony attended by PFEW’s National Chair John Apter. 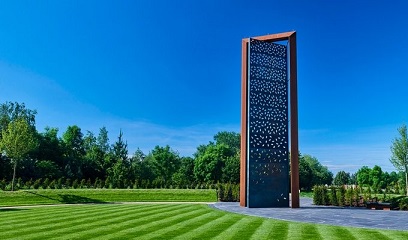 The dedication ceremony was attended by 400 guests from across the policing family, including chief officers, bereaved relatives, Federation Representatives, policing charities, together with UK Government and devolved administration representatives.

After the ceremony National Chair John Apter said: “The National Memorial Arboretum has been a long time in the planning, so I was especially proud to attend along with colleagues and families who tragically lost love ones. I couldn’t be prouder to stand with them and see this memorial finally opened and unveiled to the public.

“It’s really important the memorial - along with other memorials across the country – is recognised for what it is intended. That is to remember the supreme sacrifices colleagues have made over a great many years.

“It was an honour to have attended and to lay a wreath on behalf of the 130,000 police officers the Federation represents. This memorial will be especially important to colleagues and ensure friends and colleagues will always be remembered – they will never be forgotten.”

The ceremony began with a fly past by the National Police Air Service, and during the service there were performances by mezzo-soprano Katherine Jenkins and the British Police Symphony Orchestra, plus a minute silence to remember the fallen.

The Prince of Wales unveiled a plaque before leading the laying of wreaths at the foot of the memorial – which was designed to embrace the Celtic spiritual concept of a thin place. He was then shown the striking 12-metre-high brass memorial by architect and designer Walter Jack, before walking through a line of standard- bearers on his way to meet bereaved family members.

The National Memorial Arboretum honours the 5,000 police officers and staff who have died on duty and represents the UK’s year-round centre for remembrance and is a fitting tribute which honours the courage and sacrifice of those police officers who lost their lives.

The Police Arboretum Memorial Trust was established in March 2014 to raise funds and after a six- year fundraising campaign, the fathers of PCs Fiona Bone and Nicola Hughes – who were killed in Manchester in 2012 – performed the ground-breaking ceremony.