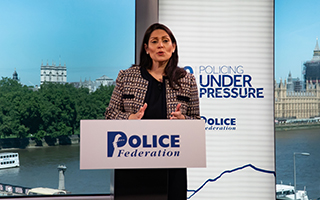 The Home Secretary assured the Police Federation Conference today (9 June) that she is listening to policing and has got officers’ backs.

Priti Patel, who shared a platform with our National Chair John Apter, said she values the ‘challenging’ conversations she has with the Federation.

Describing herself as the police officers’ political advocate in Westminster, she conceded that the confidence of those in uniform in their Home Secretary must be earned and is under constant review.

Ms Patel said: “Nothing gives me greater pride than being able to work with men and women who do an extraordinary job under increasingly extraordinary circumstances.

“I routinely join the police on patrol, attend raids, visit stations and operational centres, and spend as much time as possible talking with officers of every rank. I know that heroes walk among us because I have met them.”

She added: “You have my support. That is a guarantee.”

The Home Secretary listed ways she felt the Government is supporting police officers, from recruiting 8,771 more officers as part of a 20,000 uplift to doubling the maximum custodial sentences for assault or battery against emergency workers.

She also pledged to support the roll-out of Taser and empowering officers to use stop and search powers.

Ms Patel hailed the Police Covenant provision under the Police Crime, Sentencing and Courts Bill as being an opportunity to recognise in law the service of police officers and the obligation of the state to support officers’ wellbeing.

The Home Secretary also touched on the issue of assaults against emergency workers, noting that officers have been “spat and coughed at by thugs claiming to have the virus” and attacked by mobs in Bristol earlier this year.

She said: “This behaviour is grotesque. And I will never accept that it’s simply part of the job. It is an attack on the fabric of our society. And every police uniform is worn by a human being who is entitled to dignity and respect.”

The right to protest and speak freely “does not include the right to smash up property, or abuse police officers”, Ms Patel added.

She concluded her remarks by encouraging officers to feel very proud to wear the uniform: “Without you, the public would not feel safe. Without you, criminals would run riot and this country would fall apart. This country depends on you. And I have got your backs.”