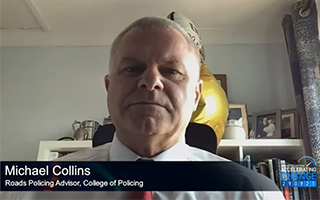 At the Police Federation of England and Wales’ Virtual Roads Policing Conference 2021, he told delegates: “Some forces have been incredibly good at training officers and some not so good. Some have even given no training to roads police officers.”

The session ‘Driving Change: Providing the tools and guidance to support officers and their career development,’ sponsored by the College of Policing, focussed on accessing roads policing role profiles and ascertaining the requirements for each.

It also covered the PIP process for Serious Collision Investigation with regards to attaining PIP2 accreditation.

In his last act as a police officer, Mr Collins, who is to retire after almost 42 years of service, ran through the College Learn system and advised those who were interested in developing their skills to register on this informative portal.

The College’s learning facility – the benchmark system for Roads training – has been designed as an introduction to the Roads Policing Programme, so forces can develop their own individual training programmes and train officers to a minimum national standard.

Mr Collins added: “Our Professionalising Investigation Programme (PIP) is being updated to include a Serious Collision Investigation module.

“We have rewritten the learning outcomes to deal with officer safety. There is an enhanced training for officers who specialise in the roads policing environment.

“However, a lot of forces have motorways in their area, and all their officers will all use motorways and come across an incident they would not ordinarily be expected to deal with. They have to stop and get out, so this is designed for them.”

Mr Collins detailed the College’s aims for the future, and said the goal was to:

At the conclusion of the session, PFEW’s Roads policing lead Gemma Fox praised Mr Collins for his lengthy service – most of it in roads policing.