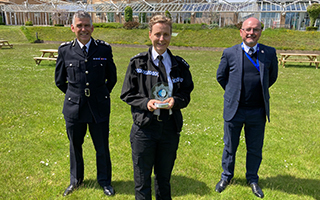 A Chief Inspector who courageously shared her own experiences of domestic abuse has won the Police Federation’s prestigious Outstanding Contribution to Women in Policing Award, sponsored by No1 CopperPot.

CI Sharon Baker of Avon and Somerset Police was named the winner on 9 June by Dame Cressida Dick, Commissioner of the Metropolitan Police, at the Police Federation of England and Wales’s Annual Conference.

She was recognised for her tireless work around domestic abuse, including sharing a powerful video about her own experiences. The six-minute film featured CI Baker courageously facing the camera, revealing she had suffered appalling domestic abuse.

CI Baker had never openly shared her experience before and revealed intimate and personal memories of her past to urge others to break down the wall of silence that surrounds domestic abuse and to make a difference to those who are suffering. Many fellow officers directly contacted her following the video, to share their own devastating experiences.

CI Baker was nominated for her tireless work to promote change and help for victims within the force, including forming an innovative method for how disclosures of domestic abuse within the force are managed. She has created a ‘pledge’ that is recommended supervisors use when faced with such disclosures, which includes statements designed to support the victim, including assurances surrounding confidentiality, support, impartiality, and safety at work.

CI Baker said: "It’s such an honour to have even been considered for this award, I still can’t believe it. Anything I have been able to achieve has only been possible because of the help of so many others.

“I’ll be forever grateful that I was believed, listened to and cared for when I needed it most. Domestic abuse reaches into every corner of the organisation, it affects us all. There is no them, only us”.

She added: “This award is really for those victims who are suffering from abuse now. I hope it shines a light into the darkness and shows you’re not alone”.

Zoe Wakefield, Chair of PFEW’s National Women’s Group, said: “By bravely sharing her own experiences of domestic abuse, CI Baker has given a voice to those who have felt unable to speak out. Her dedication to using her own personal experiences to help others is incredible and as the national lead of the Women’s Group for PFEW, I am very proud of what she has achieved; she is a truly worthy winner of this award.”

Award runners up were:

• CI Julian Smith of West Mercia Police for being a strong advocate of diversity and inclusion within the workplace, taking active measures to ensure staff are empowered and supported to make informed career choices in what can often be dismissed as a male dominated environment.

• DI Rod Kenny of Hampshire Constabulary for being instrumental in setting up a miscarriage and baby loss group within the force.