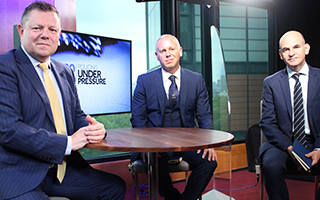 During the session titled ‘Trial By Social Media,’ the criminal barrister explained to panellists John Apter, National PFEW Chair, and journalist Danny Shaw, that forces and the Fed need to change strategy as they currently utilise a ‘1990s media response to a 2021 media landscape in policing.’

The session began with a harrowing tale from a PFEW member with 34 years’ experience who was personally identified and then horribly abused on social media.

The unidentified officer explained how media coverage only ‘portrayed one side of the story’ and he was now not the confident person he was before the incident. He added: “I don’t want anyone to go through what I have when I was simply doing my job.”

Mr Rinder, who was asked by facilitator Ian Collins to respond, said he: “Had the gift and privilege of working alongside police officers from across the country. The reality is a partial camera or video would almost certainly not be admissible in court. It’s all about trial in the public domain – and a wholly and entirely unfair representation of what took place.”

He suggested the key to responding to unfair media criticism was to alter the way the Federation and police forces dealt with cases where officers suffered ‘Trial by Media.’

He added: “There needs to be better training for young officers out there. It’s about understanding not just the law, but also that you are in the presence of people filming you. Policing in 2021 needs a meaningful national communications strategy that communicates about how to communicate on social media. It’s not just about the facts anymore – you need a more thoughtful response strategy, and to understand why people feel a certain way when you see a social media clip.

“It is also about using the same tools as the people standing there with a camera – a new thoughtful, contemporary strategy is needed.”

Danny Shaw, Head of Strategy at criminal justice and communications consultancy Crest Advisory, and the former BBC Home Affairs Correspondent, was keen to differentiate between mainstream and social media and explained how journalists in the mainstream media were extremely cautious about the veracity of social media clips.

He said: “The public are wise enough to know this. However, public confidence in policing is strong, and what impacts on public confidence is the interactions they have with police. Are they respectful, efficient and effective in their response – those are the critical things.

“I’m not diminishing the experience of being vilified on social media – but we should not get things out of perspective. I also wouldn’t get so caught up in the headlines – what’s more important is the article and balance. People are shouting at each other on social media – but mainstream has a filter.”

The former BBC man said he believed policing must improve its’ relationships with media editors as a matter of priority – to counter the changing media landscape and prominence of social media.

He added: “I don’t think policing has been good in terms of influencing media. You’ve not been good at making them understand the realities of policing. But I honestly don’t think people are looking at anti-police stories.”

National Chair Mr Apter, who has continued to call for forces to increase use of Body Worn Video to counterbalance unfair clips, explained how damaging it was for colleagues to be unfairly criticised - and how many social media clips were unfair representations of complex incidents.

He said: “The damage is immeasurable to the individual. They are doing their job – it’s all about hanging cops out to dry. The clips are then put on mainstream media with no context – then it could be death threats and officers have no right of reply.

“I’m the first to admit we are not always going to get things right. But many of the self-appointed experts on policing – they give fake news, with no right to reply.

“Policing is tough, and you don’t join for an easy ride. It is extremely personal, and this abuse feels relentless. I have a thick skin, but get lots of abuse on social media. I even get my kids phoning me up about it, and it’s personal.”

He added: “It now has an emotional and personal reach into your private space like it never did before. To balance this there needs to be more good news. It is no longer acceptable to issue a bland public response. There is a 1990s - at best - media response to a 2021 media landscape in policing.

“The answer is for the Fed and police services to provide a counter narrative in a better way.”