A look ahead at the future of the profession 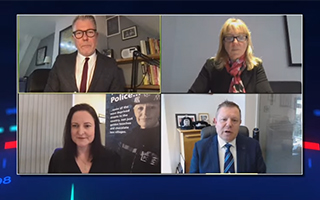 The Roads Policing Lead for the National Police Chiefs Council (NPCC) told delegates at PFEW’s Virtual Roads Policing Conference 2021 that her desire to improve safety was inspired by a family tragedy.

Chief Constable Jo Shiner shared how she had lost her father in a road accident in 1990 and how this had become her inspiration to help colleagues and the public by improving safety.

Her admission came in a session titled ‘The Future of Roads Policing’, during which she and Alison Hernandez, the Association of Police and Crime Commissioners’ Lead for Road Safety, looked ahead on the state of the profession.

Chief Constable Shiner revealed: “To give you some perspective – 1990 was the year my father was killed in an accident on his way to work. He was killed by a driver who was under the influence of drink – although that was never proven.

“He ended up getting three points on his licence, so I know exactly how it is to live with these consequences for over 30 years. Everything that I lead is led through that lived experience.

CC Shiner added that in 2020 compared to 1990, there were 3,745 fewer fatalities – but that was largely down to Covid and lockdown.

She added: “We don’t want to have to rely on having to lockdown roads to save lives.”

APCC Lead Alison Hernandez stressed the importance of the role of Police and Crime Commissioners in roads policing.

She said: “In the last term of office about 50 per cent of PCCs put roads safety as a priority as part of their crime plan. This sets the priorities for the Chief Constable in the Force, and that’s a really important standard to set.

“Once you have this in the plan, it is really pivotal piece of priority setting which will help and support roads policing officers.”

Taking questions from the audience, the panellists were joined for the final part of the session by PFEW’s National Chair John Apter.

In a conversation about the rise of E-scooters, former roads officer John – who said roads policing was in his blood – said there needs to more investigation of their safety.

He said: “It’s our colleagues who have to pick up the pieces - literally in some cases. There is so much confusion about E-scooters.

“We are seeing more and more of these and people are being encouraged to be on the pavement. There needs to be real clarity.

“But where there is overwhelming evidence scooter trials are not working, we need to put an end to their use.”