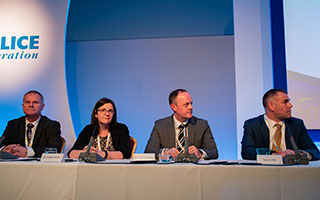 Opening the panel, DCC Terry Woods emphasised that 2020 was a key year for roads policing, saying, ‘I think we have a real opportunity, with the uplift, to raise the profile of roads policing and to use this extra funding to get our agenda further’.

Referencing the talk delivered by CC Anthony Bangham earlier in the day, Dr Helen Wells from Keele University said: ‘The tide really has turned. From my perspective, now is the time to push the academic agenda of roads policing- how fantastic would it be to enthuse criminology students to do their third-year project on roads policing?’

However, the opportunities presented by the uplift also pose new problems. Michael Collins from the College of Policing highlighted the problem of accreditation given the intricate and specific specialties of roads policing that make it unsuitable for the Post Incident Procedure (PIP) process.

Simon Hill added, ‘There is no single definition of what constitutes a roads policing officer. What is needed is a single definition with clear criteria that you can take to a force and say, do you have this? I think it’s important that there is some accreditation system that allows officers to gain recognition for their hard work and their dedication’.

‘The world’s changed, it’s right for the portfolio to reflect that,’ continued DCC Terry Woods.

Summing it up in response to a question about possible rewards for roads policing units and officers, Michael Collins said, ‘I think that most roads officers don’t want rewards. Rewards are for tomorrow. We want recognition’.

DCC Terry Woods also delivered an update on driver training, as he has recently taken over the post. He emphasized his dedication to roads policing and laid out his priorities for the year ahead, including standardisation of training, further work on legislation, and provision of insurance.