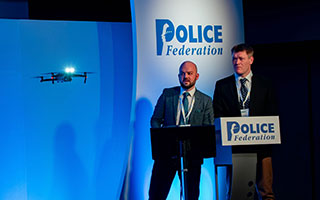 PCs Wes Turner and Bruce Yacomeni of South Yorkshire Police gave a fascinating talk on the benefits of technology in gathering evidence and tracking down suspects.

They explained that 20 ‘pilots’ – which included eight roads policing officers – were among the first wave of police trained to operate drones. The equipment costs forces in excess of £30,000 for larger flyers but smaller, £5,000 units are the more commonly used.

Delegates were shown footage of an old pit site, where a drone had carried out a successful search in a short time that would have taken a team of officers much longer. They were also shown dashcam footage of a head-on smash, along with aerial photos taken by a drone which helped to identify marks on the road and the positions of the vehicles. Such footage can also be live-streamed to a force incident manager and can also be used to aid a subsequent prosecution.

The officers also described a horrific hit and run on their patch where the suspect vehicle had gone off radar for a day and was eventually spotted by a drone under a tarpaulin in a garden. The driver was subsequently door-stepped by officers and confessed.

The drones are equipped with thermal imaging and night vision, while their powerful zoom capabilities allow for suspects to be observed from far away. In most cases they will fly within 500m of the officer directing them and to 400ft.

When asked whether drones could take the place of conventional helicopter units, PC Turner observed that many forces no longer had helicopters, but added: “The drone is not there to be a substitute – it’s maximum speed is 30mph and could not keep up with a pursuit.

Where it comes into its own is when there is a decamp. Its quick to deploy them and track suspects.”

They are also proving useful in crowd control situations (allowing officers to spot trouble from an aerial vantage point) and in monitoring anti-social behaviour hotspots.