Chair gives evidence to House of Lords on policing pandemic 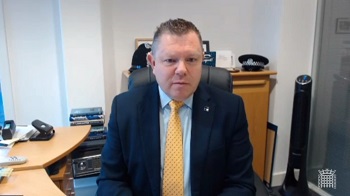 National Chair John Apter appeared at a House of Lords Constitution Committee this week to give evidence on the policing response to the pandemic.

In the session, John appeared alongside the Association of Police and Crime Commissioners’ (APCC) Chair Paddy Tipping, and highlighted the challenges of rapid changes in legislation and unfair media criticism of policing to members of the House of Lords.

During an inquiry into the constitutional implications of the COVID-19 crisis, the National Chair told the Peers on the committee that he ‘couldn’t be prouder’ of the way colleagues policed the pandemic.

Mr Apter said: “This has been the most unprecedented time for policing, and it is important we recognise that”, adding, “my colleagues have absolutely stepped up to the plate during this crisis and I couldn’t be prouder of them as they are faced with the rapid changes in legislation and unfair criticism in the national media.”

Mr Apter explained how the Police Federation had raised concerns during discussions with the National Police Chiefs’ Council (NPCC), the Home Office and the wider government throughout the crisis. The Lords were told while the concerns were listened to, some messages failed to filter through to Number 10 and beyond.

John told Committee members that ahead of 4 July, dubbed “Super Saturday”, the Police Federation warned the government against relaxing restrictions on a weekend. He said: “I completely understand the economic pressures – but this decision (to open pubs on a Saturday after months of lockdown) put an intolerable amount of pressure on my colleagues. All we wanted from the Government was an understanding that when these announcements are made there are consequences for policing.”

Mr Apter shone a spotlight on members who are under an immense amount of pressure as they deal with crime levels similar to those seen before the pandemic – he also highlighted a 21 per cent increase in recorded assaults on police officers during the first period of lockdown, compared to the same time the year before.

When asked how police officers on the frontline were advised of changes to coronavirus restrictions and whether they have been clear, he said there were often delays because of the speed of new legislation and the main information was shared via PowerPoint presentations. He said officers preferred to be told face to face on shift briefings and stressed the need for simpler guidance.

He added: “With the guidance, we have over-complicated it. I acknowledge lessons have been learnt and I appreciate this is an unprecedented time, but simplicity is key. I accept the tiering system has made it more complex, but it doesn’t help colleagues out on the frontline.”

Following his appearance, John said; “This was a good opportunity to highlight the realities of policing during the pandemic and the pressure my colleagues have been, and remain, under. We have been policing in the most unprecedented of times. My colleagues have been labelled the villains of this pandemic by some media; this is an insult to those officers who have done their absolute best in these difficult times."

Watch the full proceedings on YouTube below (John's evidence begins at 2.36)