Blog: Disability in the workplace 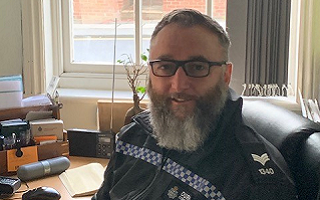 When it began, I was a Deputy Sergeant in safeguarding working long hours on a lot of investigations. I often felt ‘under the weather’, very cold and very tired. I remember I reached a particularly low point after I’d worked eight long days on a domestic stabbing. I felt awful, but not bad enough to stop working.

From there, I began to feel fatigued even when I wasn’t at work. Everyday activities I used to enjoy were wiping me out and eventually, at hour 20 on a weekend shift, I simply stood up and fainted. I went to hospital and, after three months of checks ruling everything else out, ended up being diagnosed with chronic fatigue.

The biggest way that chronic fatigue affects me at work is having the ability to get up and do a job. I became a Neighbourhood Sergeant before I was diagnosed and there are times when I can see I should go out with someone but I just can’t do it because I know that the after-effects will be bad. Things just wipe me out, but not just physically. Talking to people and having long meetings can really take a toll on the rest of my day, but that’s a big part of the role. I must manage my time very carefully.

Another way the disease affected me initially was that because of my condition, my immune system is poor. Three periods of sickness in one year resulted in me having ‘unsatisfactory attendance’ - this is when I contacted the Federation and they were absolutely brilliant. They pointed out that I qualified as disabled under the Equality Act and, though I still have meetings on my attendance in place, I now have adjustments to my working hours and there’s more understanding about my condition within my workplace.

Thanks to the help I received from the Federation, I’ve been able to go part-time and have firm start and finish hours so that I can get the time I need to recharge. I also have my own office so that I don’t get distracted from my work, plus two screens and a reclining chair - the chair in particular has meant that I get quite a few visitors who all seem to need to sit on it!

In the past month or so, I’ve also received a ‘wellbeing passport’ which details my chronic fatigue and provisions so that I don’t have to keep explaining the condition if I move jobs or if I get a new superintendent, which is a huge relief.

It can be really difficult with chronic fatigue mentally as you sometimes feel like you’re not doing a full job, or you must re-evaluate your ambitions to something more realistic. Workwise, I just want to do a good job year to year in the community – I’m very lucky that I have the job I wanted and it’s as simple as focusing on that. It’s not about changing the world but about making a difference locally.

#YourFederation is there for you. If you are struggling with a disability or think you may have a disability that is impacting your work, don’t hesitate to contact your local Fed rep for advice, guidance and support.