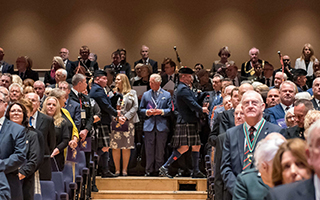 Thousands of police officers who have been killed in the line of duty were honoured at today’s annual National Police Memorial Day service in Glasgow.

HRH The Prince of Wales, Patron of the charity, was among those in attendance at the Royal Concert Hall in Glasgow.  Known in Scotland as the Duke of Rothesay, HRH was joined by Home Secretary, the Rt. Hon. Priti Patel, Scotland’s First Minister, the Rt. Hon. Nicola Sturgeon, more than 40 Chief Constables and around 1,500 former colleagues and family members of serving police officers who lost their lives in the line of duty.

In the commemorative brochure, HRH The Prince of Wales said: “Policing in the United Kingdom has enormous pressures to contend with, no more so than on the front line.  As society changes, so must the way in which we support and protect our communities. Your job is one of the toughest there is, and all too often your efforts go unrecognized.

Representing the Police Federation of England and Wales, National Chair, John Apter said: “National Police Memorial Day is such an important and significant day in the policing calendar. I am proud to stand with my colleagues in honour of those who gave their lives in the line of duty.

“Policing comes with a huge amount of risk and today is a stark reminder of just how precious life is. We will always remember the sacrifices made – we honour our brave officers and give our utmost respect to their loved ones who mourn their loss.

“For their dedication to duty in keeping us safe, we are forever grateful, and we will never forget them.”

Home Secretary Priti Patel who gave a reading during the service, said: “Today is a day to remember the bravery, commitment, and sacrifices of police officers who have died serving their country.

“It serves to remind us of the extraordinary courage officers show to keep running to the front line, day in day out.

“I am going to give the police and their families the protection and the support they deserve.”

Chief Constable of Police Scotland, Iain Livingstone QPM said: “I am honoured, as Chief Constable of the host force, to once again be involved in the National Police Memorial. It is a poignant and important occasion for us all.

“Police officers perform a difficult and sometimes dangerous job. We do so without fear or favour, with courage, integrity and humanity. Policing is a job like no other, it is a vocation. It’s not what we do, it’s who we are.

“These occasions allow us to come together to remember and honour those who are not here, but through our memories remain with us.”

During the service, prayers were led by Marilyn Bromilow, the sister-in-law of PC John Edward Bromilow, who was fatally injured in 1979 in a patrol car crash whilst escorting a prisoner; Chief Inspector Gill Marshall of Police Scotland, widow of PC Alan McMurray, who died in 2006 when he was struck be a van whilst attending the scene of an accident; and Stephen White, Chair of the Royal Ulster Constabulary George Cross Foundation.

During the service, candles were lit by relatives who mourn their loved ones and in remembrance of officers throughout the country who have lost their lives.  Representing Scotland, Margaret Sinclair, supported by her daughter, Patricia Sinclair, wife and daughter of PC Leslie Sinclair, who died in 1972 from injuries sustained in a road traffic collision whilst on duty.

Representing England, Rumbie Mabuto, widow of PC Joe Mabuto, who died after suffering a heart attack whilst on duty, was supported by their children, Kenny and Sophia.

Representing Wales, William Parker, son of PC Andy Parker, who was killed in a motorbike crash when travelling home after a night shift.

There was silence as petals of remembrance, representing all who have lost their lives, descended from the gallery as the orchestra played ‘Abide with me’ and the Last Post was sounded.

Speaking about the service and its importance, widow, Rumbie Mabuto, wife of Joe Mabuto, Thames Valley said: “It was a good day – we got to meet the Prince and it was touching that he knew me already and went into Joseph’s past and asked how we are doing, which was nice for the kids.”

Margaret Sinclair, widow of PC Leslie Sinclair who died in 1972, said: “It was a very calming service and an honour to be chosen to light the candle for Scotland, and meet the Prince.”

Canon David Wilbraham, National Police Chaplain and Co-ordinator of National Police Memorial Day said: “I extend my gratitude to everyone who attended today’s service and for their ongoing support.  It is always a day filled with emotion but also with immense pride.  It is only right that we stop to remember the sacrifices made by those who protect us.  I know it meant a lot to the families and friends of our fallen colleagues to have our Patron, His Royal Highness The Prince of Wales with us today in Glasgow.”