Safety needs to be the priority 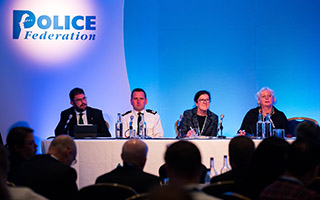 Custody sergeants should feel confident to close a suite when it is at capacity and not be pressured into taking risks with safety, a panel reiterated yesterday.

Dave Beverley, an Essex Police custody sergeant, described his role of 13 years as “challenging and demanding” and noted that custody is a “very pressured environment”.

With 18 months until he retires, he stated that he is currently working harder than ever before.

Sgt Beverley went on to say: “We are under constant pressure from our command to keep custody suites open. We are being told it is inspectors who make decisions to close, not custody sergeants. In the NHS its one nurse for every eight patients and as soon as you go to nine another nurse must be found. As custody sergeants we’re being allowed to drown and are told we must keep suites open at all cost.”

He suggested a proforma should be created for custody sergeants to document their concerns, adding: “I just want to protect all custody sergeants – we come to work to try to do our best, to keep everyone alive, and sometimes it’s difficult to juggle all the balls.”

Mr Bentley, who is also a full time Police Federation rep, reminded colleagues of regulations which state that only a superintendent can relieve a custody sergeant of command – “until then a custody sergeant is supreme, we choose to deprive people of their liberty and at that point we become responsible for their health and safety,” he said.

ACC Kemp, of Surrey Police, added: “Ultimately the buck stops with you.” He advised that custody sergeants should couch their arguments in terms of health and safety. Earlier in the seminar, Mr Kemp had hailed progress made in reducing deaths in custody to zero in the last year.

However, Ms Lyon, who chairs the IAPDC, raised the high number (58,000 recorded cases) of custody detainees self-harming and suggested that government should carry out a safety assessment ahead of any future cuts in staff numbers.

“We’ve seen people being asked to do things that pushed them to the edge of what’s safe,” she said. “There were 63 deaths following police custody and we know that 13 of these were linked to drugs or alcohol – 10 had known a mental health issue – so it is quite clear that the solutions lie in health.”

Tom Milsom, operations manager for the Independent Office of Police Conduct (IOPC), took part in the discussion, assuring the audience that a culture change is in progress. He said: “I accept that perhaps our reports in the past have been overzealous in trying to find [fault]. We’re now on a path of looking at how we can support the evidence base to improve policing.”

Mr Kemp acknowledged that there had been a “change in tone” from the IOPC in recent months with more of a focus on learning. “It’s a lot less adversarial than it was and we’re better for it,” he said.

He also agreed with a Greater Manchester Federation rep who said risk assessments vary hugely from one custody suite to another and there should be a national standard.