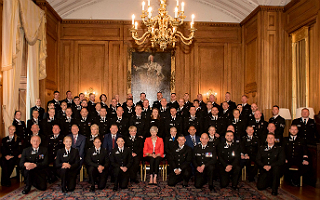 Prime Minister Theresa May today hosted a special reception at 10 Downing Street for some of the bravest police officers in England and Wales.

71 officers from 40 forces attended the reception (pictured) as a mark of recognition for their heroic acts.

Prime Minister Theresa May said: “Time and time again our police officers put their lives on the line for our country, displaying incredible bravery and courage.

“Their everyday acts of heroism do not go unnoticed, and I would like to extend my profound gratitude to all the nominees, and officers around the country, for their unwavering commitment to keeping our communities safe.”

John Apter, National Chair, Police Federation of England and Wales said: “Police officers don’t do what they do to receive thanks or recognition.  However, when they do go above and beyond its important that we recognise their heroics - even if they insist that they were just doing their job.

“Today we are recognising incredible acts of bravery where officers have put their own lives on the line to protect the public.

"In many of these cases, if it was not for the actions of these heroes I have no doubt that lives would have been lost.  They should all be incredibly proud as we are of them.”

John Perks, Chief Executive of Police Mutual who sponsor the awards, said: “For the past 11 years, Police Mutual is proud to have sponsored such an inspiring event in the policing calendar. It is a privilege for my colleagues and I to be able to show our respect for the exceptional bravery shown by police officers who risk their lives every day to protect the public and keep us safe.  We hope that we can continue to play our part in helping improve the lives of the police family.”