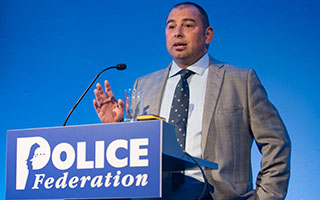 Delegates will gather in Warwickshire this week (23-24 October) for the fourth annual Police Federation seminar on post incident procedures.

The event will be hosted by TV and radio presenter Ian Collins, on the theme of ‘Back to Basics’. It will debate best practice following a death or serious injury, as well as the welfare of police officers and the public in these situations.

Steve Hartshorn, National Firearms and Taser Lead for the Police Federation of England and Wales (PFEW), said: “PIPs is one of the most popular seminars in our calendar, and is always throws up some great perspectives and learning. I’m confident this year will be no exception.

“Over the two days we will hear from an array of speakers, representing stakeholders as diverse as the National Police Chiefs’ Council (NPCC), Independent Office for Police Conduct (IOPC) and the Police Firearms Officers’ Association (PFOA). We will hear from those involved in the case of Sean Rigg, a detainee who died in police custody in London, and from officers on the ground in Salisbury who dealt with the poisoning of a former spy and his daughter last year.”

Simon Chesterman, NPCC Firearms Lead, will deliver the keynote address and Dr Meng Aw-yong, Medical Director for the Metropolitan Police, will lead a session examining the burden of responsibility on police officers who are trained to shoot.
Mark Williams of PFOA will raise awareness of the Welfare Support Programme (WSP), which provides advice and mental health counselling for officers, and PFEW National Board members, Hayley Aley and Phill Matthews, will present on police officer wellbeing and the need for a time limit on officer investigations, respectively.

If you are not attending the event, be sure to follow developments on Twitter using the hashtag #PFEWPIPs and at our event page, where will be posting highlights of the two days.