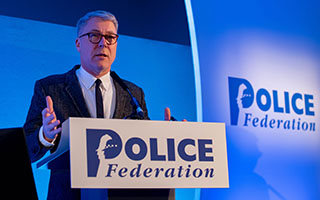 We have the “best trained, most restrained and most professional armed police in the world”, delegates at the Police Federation of England and Wales’ (PFEW) Post Incident Procedures seminar heard.

Those remarks were from Chief Constable Simon Chesterman, Firearms Lead for the National Police Chiefs’ Council (NPCC), in his keynote address to the seminar in Warwickshire – which took place on 23-24 October, facilitated by TV and radio presenter Ian Collins.

Mr Chesterman said in his view, “PIPs are about accountability, achieving best evidence and seeking the truth” and offered some key advice to Post Incident Managers – “stick to the Authorised Professional Practice (APP) and you won’t go far wrong.” The APP, which is the guidebook for PIPs has evolved through legal challenges and updates and is robust.

The Chief Constable added: “The APP is there to make sure we have a thorough and independent investigation and that the welfare of the officers and the members of staff involved is taken care of.”

Steve Hartshorn, PFEW’s Firearms and Taser Lead, built on the seminar’s title, ‘Back to Basics’, by walking delegates through the best practice he had learned over many years representing officers in PIP situations. Delegates also heard from College of Policing’s Kev Nicholson, and Mark Wardley of Straw & Pearce Solicitors, around the separation of police witnesses in a PIP and when it should be done - only when “safe necessary and practical”.

Five officers have been pulled back from the brink of suicide by the Welfare Support Programme (WSP), said Mark Williams, chief executive of the Police Firearms Officers’ Association (PFOA). This is a counselling service, funded by the PFOA and PFEW, that reaches out to officers proactively on referral, rather than waiting for them to get in touch.

Hayley Aley and Phill Matthews, two members of PFEW’s National Board, took to the stage to present on two developing campaigns. Mrs Aley is raising awareness of police officer wellbeing, looking at the four key areas of mental, physical, general and financial health. Mr Matthews introduced Time Limits – a new PFEW campaign calling for criminal or misconduct investigations into officers to be time-limited. He offered powerful testimony from officers who had been subjected to long and traumatic ordeals by the Independent Office for Police Conduct (IOPC) or their own forces.

There was more criticism of the police watchdog from Andy Birks, a former Metropolitan Police officer investigated for a decade over the death in custody of Sean Rigg. This had included five years when Mr Birks had been suspended and prevented from retiring.

The IOPC’s Director of Strategy, Kathie Cashell, and Regional Director for London, Sal Naseem, assured that a culture change was underway, reorienting the organisation towards learning rather than apportioning blame, with the ambition of ‘improving public confidence in policing’.

A panel discussion was held involving the IOPC, Straw & Pearce Solicitors, PFEW and Dr Meng Aw-yong. It debated the need for time-limited investigations and for better communication between the IOPC and stakeholders.

The seminar featured sensitive sessions, closed to the media, talking about counter terrorism methods to deal with incidents at airports, including the growing threat of drones – and heard from officers who investigated the Novichok poisoning incident in Salisbury.

In another such session, Dr Meng Aw-yong, Medical Director to the Metropolitan Police, delved into case studies of officers who have experienced major trauma. He revealed that a police officer dies by suicide every two weeks, and there are no official statistics regarding the deaths of police staff, veterans, or attempts to die by suicide. One case, an officer who had attended a number of fatal incidents and had delivered ‘far too many death messages’, had “never once” been asked how he was, following these incidents - he was expected to get on with the job.

The Seminar also heard from Neil Copland, a Nottinghamshire officer subjected to '27 months of hell' when he was investigated over injuries sustained by a fleeing suspect.

For more on the 2019 Post Incident Procedures seminar, and photo gallery go to the main page