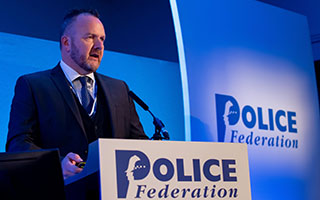 Nottinghamshire PC Neil Copland’s life was turned upside down following the pursuit of a suspect in the aftermath of a road traffic collision.

The Crown Prosecution Service (CPS) admitted at the plea hearing - a year after the incident - that events were “a misjudgement in the heat of a pursuit with substantial mitigation.” But they still pursued the case.

During opening arguments at the Crown Court, the CPS failed to mention that Neil was a police officer and had been in pursuit of a fleeing criminal when the incident occurred. They viewed it as a simple driving offence. A ‘pedestrian’ had been hit by a car. They initially refused to call any of the members of the public, who seen the pursuit and the suspect driving dangerously, as witnesses.

At lunch on the first day of the trial, the judge threatened to direct the jury to find Neil not guilty if the CPS could not come up with more evidence. Still the CPS refused to drop the case, and eventually the judge told the jury that this was “an officer on duty trying to stop a criminal” and as a result he had a defence in law, the prosecution had failed to make a case, show that Neil’s actions were unreasonable or demonstrate what else could have been done.

Still the CPS refused to accept this- and threatened to appeal the decision. Only after another delay, did they decide to dismiss the case. Neil endured a further wait, before the misconduct hearing was abandoned too.

During this time, Neil had been moved onto another shift, separating him from his colleagues. It left him “isolated socially, not knowing who I was or where I belonged.” It caused untold emotional distress, not only to Neil and his family, but also to those colleagues who had been called as prosecution witnesses. His Sergeant said that the case had caused him sleepless nights and it had “destroyed him” to walk into court and see a colleague sitting in a secure dock.

Calling for the system to be improved, Neil emphasised that while officers must be held to account, they do not deserve to be treated worse than criminals. No case of dangerous driving involving an offender would have taken 27-months to conclude. It would also not have made it to court based on the evidence the CPS had in this case.

Dave Keen, Neil’s Federation rep throughout this case, also made clear that the system needs to change. There were “a number of opportunities for this to end. It was crystal clear that the case was not there. But it carried on.” He also urged all reps to ensure that Post Incident Procedures (PIPs) are properly followed. In Neil’s case, a senior officer had decided that the incident was not serious enough to warrant PIPs – which meant that important information that would have helped in Neil’s defence wasn’t documented at the earliest opportunity.