Need for custody expansion recognised in wake of 20,000 uplift 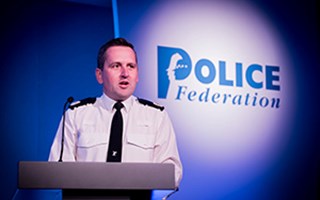 Some forces will need to consider upgrading and expanding custody suites to coincide with the Home Office’s recruitment pledge, says the National Police Chiefs’ Council custody lead as a new design guide is launched.

Today (September 10) at the Police Federation’s National Custody Seminar at Hinckley, Leicestershire, Assistant Chief Constable Nev Kemp QPM said he is uncertain how an uplift of 20,000 officers would affect custody provisions before announcing the introduction of a Police Custody Design Guide which will help forces carry out construction or refurbishment plans.

Chris Bentley, chair of the National Custody Forum, PFEW Custody Lead Clive Knight and Rob Camp, West Mercia's custody lead  have provided input to the National Police Estate Group (NPEG) custody review panel into how custody centres should be designed and constructed; supporting not only detainee well-being and dignity but also the welfare of staff working in custody.

The NPEG custody review panel, headed by Inspector Tony Maggs from the College of Policing, will support police forces with these projects, acting as peer reviewers.

ACC Kemp said: “I am pleased that the potential need for additional custody provision is being considered as part of the Government announcement of an uplift of 20,000 more police officers. This may of course mean that in some areas, there is the need to consider new or the upgrading of the custody estate and so I am also pleased to be able to announce today the launch of the new Custody Design Guide.”

The announcement follows the launch of the Home Office’s national campaign to recruit 20,000 police officers in the wake of the Prime Minister’s commitment to bolster the service over the next three years.

The Police Custody Design Guide will also be of interest to construction companies, architects and suppliers who provide custodial design support or custodial products. Some of those companies are present at the conference or have provided sponsorship for this event.

It should now be used as the reference document for any custody estate work, replacing the Home Office Police Buildings Design Guide on Custody Suites and the National Police Estates Group (NPEG) Best Practice Guide.