My first year as National Chair

It’s been a year to the day since I took over as National Chair of the Police Federation of England and Wales after being elected directly by the members. I made a promise then that I would listen to them and I would be more visible than any other Chair has been. A year on, I want to reflect on my time here and to step back and take a look at how much we have achieved.

From day one I have listened to many people, including the critics who believed the PFEW is out of touch and have acted upon it, breaking down barriers and being more visible. When I go on patrol with colleagues it is not a gimmick or a PR stunt, I go out on patrol to really listen and understand members’ problems and experiences so when I am in conversation with decision makers such as the Prime Minister, the Home Secretary or chief constables those concerns can be raised, without any filter! Colleagues need to know that their voice is being heard at the very highest level – but there is more that can be done. 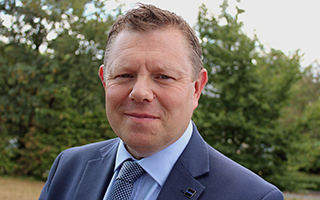 In terms of pay and conditions, the past several years have been really, really difficult and we have worked hard to get the best pay deal for our members even though the result has not been what our members deserved.

One of the first things I did as Chair, along with National Secretary Alex Duncan, was to start legal action against the Government for the way it conducted the PRRB process last year. It is important those in power know we will never shy away from legally challenging them when required.

I share the members’ frustration over pensions and pay. We deserve our pensions to be better, and we deserve a much bigger pay rise than 2.5%. What we don’t deserve is for our pay and conditions being eroded as much as they have. Police officers do a unique and challenging job protecting and serving our communities – their pay must reflect that.

When it comes to pensions, I reaffirm what I’ve said before; we will fight for the absolute best deal for all our members, and if it’s not acceptable and if there is an avenue to take legal action we will.

I genuinely believe that things are looking up. Over the past few months the relationship with the Government has noticeably been much more constructive, the tone has changed and there is an increased willingness to listen to us and engage with us.

I like to think I have played a small part in building this new relationship by being the voice for our members. Hopefully we’ll start to see them make good on their promises – as well as gaining 20,000 new colleagues – although we wait to see how they are going to be funded!

We have also seen a change in law to ensure those who attack my colleagues are handed harsher punishments thanks in no small part to our Protect the Protectors campaign.

However, the law change has not gone far enough, and we will be continuing work to ensure offenders who assault our colleagues are not allowed to walk away with nothing more than just a slap on the wrist.

Another piece of legislation we continue to push for is the change in law regarding police drivers. There have been some delays, but the work continues behind the scenes, pushing the Government to commit to a date as to when they can begin to pass the draft Bill through Parliament.

Earlier this year the then Home Secretary Sajid Javid made a pledge for a change in the law and it has taken way too long, but if it wasn’t for the Police Federation fighting for it nobody else would. And we will continue to do so, to ensure this important issue is not allowed to slip off the Home Office’s agenda.

I am also pushing for the proposed Police Covenant to come into fruition, meaning my colleagues will be given greater mental health and medical support, as well as members of the Special Constabulary becoming part of the Federation.

But there is so much more I want to do. When officers talk about the Federation I want them to say we were here when they needed us. I accept we will not always get it right, but as long as we are doing the best we can, with the members at the heart of everything we do, then I don’t think you can go far wrong.

I hear every day from officers who may have been on the wrong side of a complaint or have been through a post-incident situation or have had a mental health crisis or a crisis at home the Federation has been there for them. The local Reps have offered that brilliant and unwavering support without fanfare, without shouting it from the rooftops - they do an incredible job for the members. That’s what I hear from those we represent, I know we are there doing the very best for officers and their families.

I never dreamt 26 years ago when I joined Hampshire Constabulary that I would end up being the chair of the Police Federation; and whatever the future of policing holds for me, the past 12 months have been something I will never forget, it has been a real privilege.

Today marks 100 years since the The Police Act came into effect which paved the way for the creation of the National Police Federation and what better time is there to be National Chair than during our centenary year? To be honest it’s probably been one of the most eventful and it’s the first time we’ve reformed the way we elect people – the Federation is very different to how it was a few years ago, in a good way!

I have also met some incredible people over the last 12 months who have either been shaped by the Federation or who have helped shape it. For me to undertake this role has been an honour and I hope I do my predecessors - and successors - justice.

We have exciting plans in place to commemorate our centenary, which will reflect and reaffirm our commitment to our members and provide an excellent springboard as we embark on our next 100 years.

I will finish this by thanking our members who have supported me, it really is appreciated. Also, to our unsung heroes, those local Reps who make the Police Federation what it is. They are the backbone of the organisation.