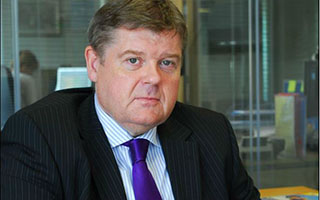 A lasting memorial to former National Chair of the Police Federation of England and Wales (PFEW), Paul McKeever, will be unveiled today (19 June) at PFEW’s headquarters in Leatherhead.

A suite of five recently created and refurbished conference rooms will be named the Paul McKeever Conference Rooms in memory of the man who lead the staff association from May 2008 until his death in January 2013.

The rooms will be officially opened by Mr McKeever’s wife Charmian in the presence of National Police Chaplain David Wilbraham, current and former National Board members and other dignitaries – following a prayer and speeches. A photo of Mr McKeever will be in place by the entrance of the main conference room to welcome future generations of Police Federation representatives, and inscribed with the words ‘a gentleman, colleague and friend to many’.

PFEW National Chair, John Apter, said: “Paul was an inspiration to me personally and was someone I respected immensely, both for what he achieved for the Police Federation and as a person. He was approachable, kind, considerate and so generous with his time.
“Paul was someone who was there for the members – he would do the little things that matter so much, such as phoning officers who had been through tough times. He was a great orator and he represented the organisation so well. The fact that he died so close to his retirement and without realising the plans he’d made with his family was so tragic, it was so painful for many of us at the time.”

Mr Apter recalls words of advice that ultimately inspired him to follow in Mr McKeever’s footsteps and become National Chair. “I remember Paul saying you can’t make the changes you want from the outside, you need to be within,” he added.

Mr McKeever was born in Germany in 1956 and read geography at university before joining the Metropolitan Police in 1977. He served in the London Borough of Lambeth until 1989, including policing the Brixton Riots in 1981. He later served in Bromley as a sergeant.

In 1992 he became a Police Federation rep and graduated to the Joint Central Committee (the forerunner of today’s National Board) in 2002, going on to chair the Professional Standards and Health and Safety committees as well chairing the Sergeants’ Central Committee. He was elected National Chair in May 2008.

During five-years at the helm Mr McKeever earned a reputation as a powerful conference speaker, giving full voice to the beliefs, aspirations and frustrations of his members. He once famously ambushed Home Secretary Theresa May by asking Conference for a show of hands of who believed the Winsor reforms would benefit policing. He then quipped, “I notice even you didn’t put your hand up Home Secretary”, which is still talked about today.

He is also remembered fondly at Federation House for his love of cakes and custard and the Telegraph crossword, and for stories about his spaniel Hettie who visited the headquarters several times to run up and down the corridors.

Mr Apter added: “Paul had to navigate some very choppy waters during his time as National Chair. To have these training rooms, where new reps who will be the future of our Federation are taught, and where experienced reps will come for their learning, and for them to always see Paul’s name there is so important. Paul is someone that this organisation should never forget and that’s why I felt so strongly that we should name the conference suite after him.”