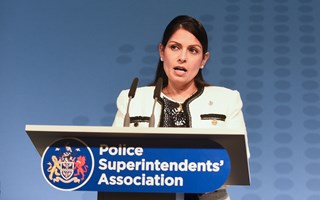 The Home Secretary acknowledged that policing had been underfunded and under-supported, and that she was determined to properly address this and ‘reset’ the situation which successive governments had allowed.

“I will do everything as Home Secretary to empower you to do your jobs’ she said adding “restoring pride in policing is what I intend to do.”

On the issue of officer recruitment, the home secretary reiterated that funding was now in place to recruit 20,000 new police officers.

Chief Superintendent Paul Giiffiths, President of the Police Superintendents’ Association in his opening address to the conference reminded the Home Secretary that in order to restore officer numbers back to their 2009 levels approximately 40,000 officers would need to be recruited – which the Police Federation has recently warned about also.

Priti Patel also spoke about steps that she would be taking to assist and improve officer health, wellbeing and family support, through the adoption and development of the Police Covenant, which the Federation has previously welcomed and endorses.

In a change to what has been said before the Home Secretary indicated that both the Police Federation of England and Wales and the PSA would be invited to attend sessions of the recently convened National Policing Board.

When asked by a delegate attending the conference why key bodies representing police officers had not been invited to attend the first meeting of the National Police Board the Home Secretary responded saying that she was “keen for all elements of the police family to be properly represented.”

The PFEW welcomes this development but would continue to press for full representation for all police staff associations at the National Policing Board.

To better protect police officers the Home Secretary said that she would be working with others in Government to review the sentencing guidelines which courts could administer to those who were found guilty of assaulting police officers, but gave no specific policy proposals in her speech.

PFEW National Chair, John Apter, who had a meeting with the Home Secretary before she made her speech said; “Both the previous Home Secretary, Sajid Javid, and Priti Patel have made it clear that policing has not been given the priority that it should have.

"The positive stance coming from the Home Office, and wider Government, is refreshing and something we haven’t seen in over a decade," he said.

Mt Apter added: “I welcome this and look forward to working with the Home Office to bring about the much needed and positive change to policing that is being proposed and is so desperately needed.”