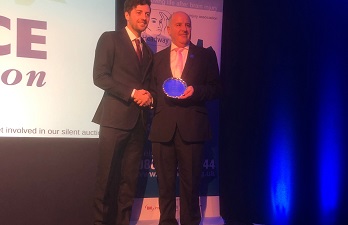 The Federation has been awarded for its work in making a difference to the lives of brain injury survivors.

The project aims to raise awareness of brain injuries among officers - particularly custody officers – who may come into contact with victims, witnesses or detainees who are affected by this type of injury.

Officers will be trained to spot the signs – including mobility or speech difficulties and emotional/anger problems - prompting them to check for a Headway Brain Injury Identity Card.

These actions may sometimes be mistaken for intoxication, so the card will ensure survivors are identified at the earliest possible opportunity and given appropriate support.

So far, training has been rolled-out to Surrey Police and there are proposals to expand this further by educating all Metropolitan Police Service mental health leads and to other forces.

Clive Knight, Custody lead for the Police Federation of England and Wales, said: “I have much pleasure in accepting this award on behalf of the Federation and I thank the trustees for the nomination.

“The work undertaken by the Headway Justice Project is extremely important. If our members know what to look out for it can be a cue for them to check for a brain injury identity card so they can provide better, more appropriate, support and assistance.

“The Federation is proud to have played a small part in raising awareness of the initiative and we are delighted to learn of the many forces which have expressed an interest in this work.

“We look forward to continuing work with Headway to explore ways to further promote the project.”

Andrew Green, Chairman of Headway, said he was delighted to present the award to PFEW and thanked it for its continued support.

He said: “The Police Federation of England and Wales has been a passionate and committed advocate of the Justice Project.

“Along with helping us raise awareness of the scheme, it has also invited Headway to speak at numerous important events and enabled us to target training to key staff throughout its network.

“We wanted to use our 40th anniversary to give special thanks to organisations who have joined us in making a difference to the lives of brain injury survivors, and without doubt the Federation have done so.”