Documentary conveys the severity of officers being assaulted on duty 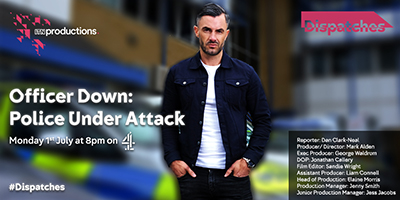 An exclusive survey for Channel 4’s Dispatches has disclosed a dramatic rise in assaults on police officers serving on the frontline. One thousand police officers took part in the survey, with nearly 80% revealing they had been assaulted at least once over the last 12 months. In the same period almost a third of the officers said they had suffered an injury that required medical attention due to an on-duty assault. Around 90% said physical attacks were now more frequent compared with 2016 and 2017.

These figures will be revealed by former police officer turned reporter, Dan Clark-Neal, on Channel 4’s Dispatches: Officer Down: Police Under Attack on Monday 1 July at 8pm.

According to Home Office figures in 2017/18, there were over 26,000 recorded assaults on officers - a rise of 20% over the last two years.  The number of recorded assaults has increased by around 70% since 2011, with a police officer reportedly being attacked, on average, every 20 minutes.  Through the Police Federation of England and Wales’ (PFEW) work in this area, the actual extent of the issue is far worse – with disparity in recording practices and procedures across forces.

As part of the investigation, Dispatches discovered that on average, police officers are calling for urgent assistance 82 times a day, a rise of 10 per cent over the last year[1].

PFEW’s National Chair John Apter, said: “It is important the public see the reality of what officers have to endure – extreme violence for simply doing their job.

“The Dispatches programme will be tough viewing but it’s important the public, politicians and the media see the reality of the level of violence our officers have to face every day. Our focus remains on doing as much as we can to improve the level of support and protective equipment available to help combat an issue which has become intolerable. The safety of our police officers must not be a postcode lottery, they must all have access to the best possible training, equipment and support.

“It is completely unacceptable for officers to be subjected to such levels of violence, this is why I want to see officers having access to more Taser, more spit and bite guards, and above all else we need resilience and that means more police officers.

“This has at long last been acknowledged by the Home Office, it now needs to be delivered.”

Dispatches sent Freedom of Information requests to every police force in the UK and discovered that last year, due to a range of mental health issues, police officers were off sick for over 500,000 days[2].  Almost 34% of officers forced to retire on medical grounds did so because of mental health issues. Dispatches examines how the increase in assaults could be behind some of these officers having to take sick days or be medically retired.

During the programme Dr Jess Miller, Neuropsychology Research Fellow from Cambridge University, reveals new research taken from interviews with 17,000 police officers across the UK. Her study, focusing on their mental health shows that anxiety levels are high, with 43% reporting that their sense of threat is heightened because of exposure to traumatic incidents, including personal assaults.  Nearly a third are re-experiencing incidents, exhibiting avoidance of situations and places and people reminding them of previous incidents.

She says: “If you put any person in a situation where they're repeatedly abused, then cognitive function and wellbeing are going to suffer as result.”

She adds: “The starkest finding was that one in five officers and staff have some form of PTSD. That Complex PTSD was the most prominent, with 90% of officers reportedly having been exposed to a traumatic incident. Also concerning was that, of those officers who didn’t actually show clinical or problem levels of trauma impact disorder, a lot of them were still feeling the effects of trauma impact.  If you continually experience trauma again and again and again without resetting that stress response, that’s when the disorder kicks in.”

Nick Hurd, Minister of State at the Home Office, responsible for Policing told Dispatches: “We need more officers.  That has been my priority, so this year, up and down the country, we’re recruiting over 3,000 more officers and staff and PCSO’s.”

Challenged by Dan Clark-Neal if PM Theresa May was wrong to have cut 20,000 police officers since 2010, Hurd responded:

“When circumstances change, Government’s got to change.….When I started… I recognised there was too much pressure on the system, which is too stretched, and ever since then I have been working to persuade my colleagues that we needed to get more resources into the police system.”

The programme will feature shocking footage captured on police bodycam, CCTV and by the public, and will feature interviews with officers whose lives have been profoundly affected following a personal assault. The programme will ask if respect for the police is at an all-time low, and what this means for the future of maintaining law and order.