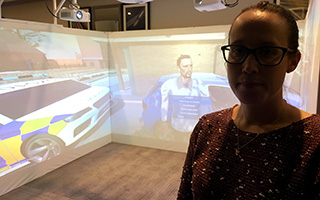 Virtual reality is now everyday reality for a police force which is using the cutting-edge technology to train its custody officers.

Gwent Police has employed the skills of the company VRS to create a number of computer-rendered scenarios which can be projected on to screens in a ‘simulator cave’ for students to interact with.

Superintendent Vicki Townsend gave a presentation to delegates at the Federation’s National Custody Seminar in Hinckley in which she explained the thinking behind her force’s ground-breaking approach.

She said: “When we think of force training days, these usually entail officers sitting for eight hours looking at Power Point presentations. This is not conducive to learning so we decided to look for better ways to do it and asked the question, 'could we build a virtual custody suite where students could interact with forms, search detainees and learn in a safe environment?'.”

In a joint pilot with Sussex Police they invested in the hardware, including projectors and screens, and worked with their technology partner to devise 10 scenarios where students could be tested on how they would manage serious incidents from domestic abuse to rape – the College of Policing provided additional funding for a custody scenario, which was demonstrated at the seminar. The system tracks the order in which students make decisions and their care plan, even paying attention to whether the officer makes eye contact with a detainee.

Supt Townsend added: “It is easy to create new scenarios and we could even run simulators in multiple locations with one remote trainer. The first group we tested this on were old school and initially weren’t keen to play ball, but after five minutes they started getting really into it. They were sharing their knowledge and experience. They don’t even realise they are learning sometimes.”

Gwent Police owns the intellectual copyright to scenarios it has devised and is hoping, as the technology rolls out further, that it can exchange its scenarios with those funded and created by other forces for shared learning.

Results of exercises carried by delegates with the simulator earlier today will be discussed on day two of the seminar.