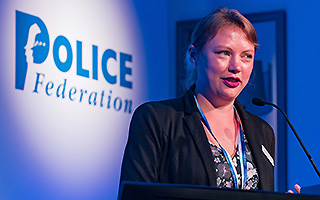 The audience at Hinckley heard from Katie Kempen, chief executive of the Independent Custody Visitors Association (ICVA), about the work of the organisation and its volunteers. They will make 9,700 unannounced visits to custody suites and speak to around 29,000 detainees in a typical year.

Ms Kempen said: “To put this in context, that is enough people to fill Lords cricket ground and twice the capacity of Thorpe Park. Some of the people who come into custody have really complex needs and we see custody staff working with them diverting them. We are super proud of the work they do. We are taking a delegation from the United Nations to see police custody this week. We’ve got no worries about that – if you compare police custody in the UK to other countries or other areas of detention, like mental health detention or prison, it is a really high standard a lot of the time.”

She explained that Police and Crime Commissioners (PCCs) have a responsibility to appoint a member of staff to coordinate local volunteers to make unannounced visits to custody suites. They will interview detainees and provide feedback to PCCs on what they see.

Ms Kempen discussed improvements that have come about as a result of ICV visits, including greater consideration for the dignity of female detainees. Homeless or vulnerable women in custody are now provided with menstrual care products in Sussex and more comfortable pads in Surrey.

She was joined on stage by Inspector Katie Andrews of Derbyshire Police, one of the nominees for the Outstanding Contribution to Police Custody award, to talk about a pilot scheme that is yielding results in that force. Insp Andrews admitted to being a little sceptical about ICVs when she took up the role of custody manager.

She said: "Feedback from staff was that the ICVs were more of a hindrance, taking them away from their core duties and taking the side of the detainee. I would receive reports from the ICV manager on a quarterly basis that told me little more, other than suspects had asked for toilet paper and a cup of tea. I felt that there was a real opportunity for ICVs to help improve standards."

Insp Andrews drove forward a record reviewing pilot in early 2018, similar to the audits that managers completed each month but from an independent perspective. She gave training to ICV volunteers to enhance their knowledge of and expectations of custody staff and helped ensure that their feedback was more relevant and got to the heart of potential problems, enabling improvements.

The pilot initially focused on women and young people’s ‘detention journey’, looking at issues such as whether juveniles were held overnight with no rationale why and how long it took for an appropriate adult (AA) to meet with detainees.

Insp Andrews said: "I compiled a checklist for observations at the suite. The relationship between the ICVs and the police has improved, with a respect and understanding of each other’s roles and the support they can provide our staff in improving standards of our care."