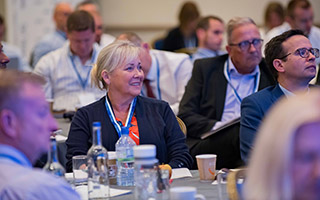 The Federation’s National Custody Seminar in Hinckley has concluded after two thought-provoking days in which speakers and audience members delved into a host of issues.

Assistant Chief Constable Nev Kemp, the National Police Chiefs’ Council lead on custody, used the occasion to announce the creation of a Police Custody Design Guide. This would help forces to construct or refurbish suites to a common standard, he said.

Mr Kemp also took part in a question and answer session, remarking afterwards that “we have probably the most professional workforce we have ever had”. As evidence for this, he cited that of the 700,000 people in police custody last year, none had died as a result of harming themselves. However, he acknowledged that custody officers are sometimes under pressure to compromise safety by keeping suites open at capacity, adding “it is important that custody sergeants articulate why they feel safety might be compromised, and it is important that senior leaders listen.”

As well as hearing from the Independent Advisory Panel on Deaths in Custody, the seminar received a presentation on the work of the Independent Custody Visitors Association (ICVA). They speak to around 29,000 detainees in a typical year and have been taking part in a pilot scheme at Derbyshire Constabulary to drive forward improvements.

DIVERT, an outreach programme for young adults which aims to steer them away from a life of crime and into employment, was explained by Inspector Jack Rowlands of the Metropolitan Police. And Gwent Police invited delegates to try out their pioneering virtual reality cave which is used as an interactive training programme for custody officers.

An awards ceremony was held at the conclusion of the first day, to recognise exceptional contributions to the world of custody. Inspector Katie Andrews of Derbyshire Constabulary was presented with the Outstanding Contribution to Police Custody accolade. Merseyside Police Custody Team 2 were announced as the Custody Team of the Year and Ulla Wachowska, a nurse who works for the Metropolitan Police at Heathrow, was honoured for her thoroughness and hard work. City of London Sergeant, Richard Longden was named Custody Officer of the Year and Professor Michael Zander was presented with a certificate of special recognition for his services to police custody.

Ché Donald, PFEW’s National Vice-Chair, also took to the stage to share the findings of the recent Demand, Capacity and Welfare survey and Cambridge University’s research into post-traumatic stress disorder (PTSD). He called for ring-fenced funding for Police Treatment Centres and the enhancement of the Welfare Support Programme to deliver counselling to Federation members in the future.

More from the National Custody Seminar