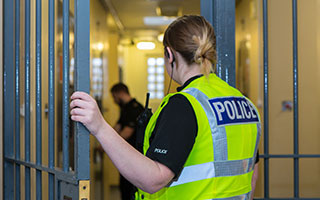 Today (15 May) we announce a brand new national awards ceremony to celebrate the work of Custody officers and staff in England and Wales.

This inaugural event, which is being jointly hosted by the Police Federation of England and Wales (PFEW) and the National Police Chiefs’ Council (NPCC), and is being sponsored by Police Credit Union, will take place on 10 September 2019 at Jury’s Inn, Hinckley Island, Leics.

PFEW Custody Lead Clive Knight said: “Custody has always been a hard-to-fill role, and with it being one of the most challenging areas of policing, the situation is not improving. So it is only right that we celebrate all the hard work by custody officers and staff in this most difficult of environments, dealing with some of the most vulnerable people in society. This year we are delighted to announce the inaugural National Custody Awards is being hosted jointly by the Police Federation of England and Wales and the National Police Chiefs’ Council which will recognise their outstanding work.”

ACC Nev Kemp, the NPCC National Custody Lead, said: "I am pleased that the Police Federation and National Police Chiefs' Council have joined together to recognise the outstanding work of officers and staff in Custody. Custody staff have tremendous responsibilities placed upon them in their pivotal role in the judicial process and in dealing with and caring for some of the most challenging people in society. We have some outstanding people working in our custody centres and it is a pleasure to recognise and highlight the work of some of them.”

The awards will form part of PFEW’s annual National Custody Seminar, which will take place at the same venue over two days from 10-11 September.

Delegates will hear from a range of speakers drawn from stakeholders and partner organisations as well as the PFEW National Custody Forum and lead representatives on key issues affecting police custody.

The annual event has developed an excellent reputation for delivering quality, relevant content aimed at those working in and around the custody environment.

The speakers are still being finalised but topics are set to include police welfare issues, training, case histories and mental health.

Make a nomination via our online portal