City of London sergeant is custody officer of the year 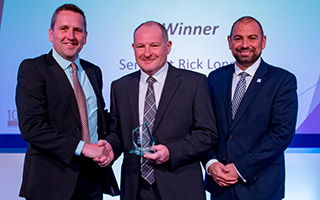 City of London Sergeant, Richard Longden was presented with the accolade at this evening’s National Custody Seminar and Awards 2019, organised by the Police Federation of England and Wales (PFEW) and National Police Chiefs’ Council (NPCC).

The judging panel were impressed by all nominees and the incredible work they do, but overall felt Sgt Longden’s outstanding commitment to the role was deserving of the top award.

Sgt Longden has been a custody sergeant in City of London Police since 2010 and has served 36 years on the frontline.

During this period, he trained to become a Qualified Police Trainer whilst juggling his custody duties so he could teach new custody staff with a formal qualification and now mentors new custody sergeants on the response teams.

He also dedicates his time to educating probationers and trains them on this rest days along with Special Constables in addition to his normal 24/7 response duties where is regularly performs the role of acting inspector.

Sgt Longden, who is also a Qualified Evidence Review Officer, is a fountain of knowledge and provides regular feedback to officers as well as conducting insightful talks to benefit members from other forces.

Custody inspectors value his expertise and he is often asked to review custody records when things have not gone well to provide his opinion.

Following a death of a female detainee who took an overdose immediately after being released and sadly died, the IPCC commented the pre-released risk assessment he carried out was one of the best they had ever seen and would be a beneficial training aid.

Sgt Longden has remained professional and committed to the role even during tough times, including being assaulted on numerous occasions.

He has had some extremely difficult detainees to deal with and regularly goes above and beyond to resolve these cases as well as successfully intervening to prevent harm or risk to a detainee or staff and himself.

In 2015 a female prisoner had been detained by the night shift team, but he quickly identified from the records that she had been trafficked into the country as a potential sex worker.

Within two hours she was transferred into the care and support of a specialist police unit rather than being treated as a criminal.

PFEW Custody Lead Clive Knight said: “Sergeant Richard Longden’s unwavering commitment to the service is truly inspirational and he is a credit to both City of London Police and the wider police service. His drive and enthusiasm to share his knowledge with colleagues, even on his rest days, shows he is passionate about his role in custody despite its challenging nature and for this he truly deserves to be custody officer of the year.”