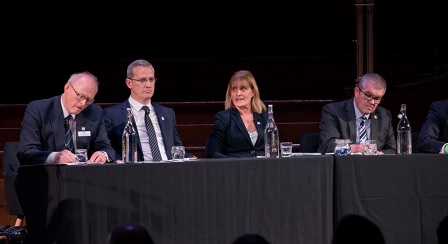 The starting salary for new recruits is “unrealistic”, according to the head of the National Police Chiefs’ Council (NPCC) and will make recruiting the 20,000 more challenging.

During a talk on policing priorities at the Federation’s Centenary event yesterday (November 21), panellists were asked by attendees whether a starting salary of £18,000 will affect the ability to recruit 20,000 officers.

“What we’ve found is starting salaries differ considerably around the country, but I don’t think that figure is a realistic figure for someone who is coming into policing.

“When we put the bid in to the Home Office for the funding, we set a mid-level range.

“We’ve got to have those conversations because we want people to come in with certain skills and aspirations.

Sir Tom Winsor, HM chief inspector of constabulary, added that this starting salary is only for the first six months and that new graduates in other sectors work on lower salaries than police officers.

He continued in order to successfully recruit and retain, the service needs to be more attractive with better pay and conditions.

Reflecting on the past, he also agreed that reforms on overtime could have “been more radical” in his independent review of police officer and staff remuneration and conditions, published March 2011.

Director of the College of Policing, Bernie O’Reilly agreed police are not the best people to deal with a person on crisis, highlighting a system used in Hampshire Constabulary, where officers do not respond to callouts involving mental health incidents unless it meets a threat and risk assessment.

Federation Deputy National Treasurer Sarah Johnson stressed the situation is getting worse and it is not right that officers are being used as a last resort, adding there needs to be more funding for mental health and social services to quell the issue, whist Sir Winsor warned this is “unsustainable” with officers under “intolerable strain”.