‘Breakdancer’ hired as part of investigation into officers 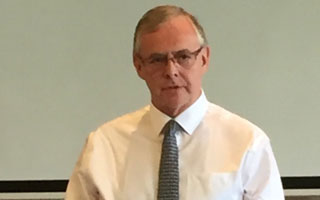 A breakdancer was hired by a review body during an 11-year investigation into five Metropolitan Police Officers over a 2008 custody death.

The former police watchdog also enlisted a body mechanics expert at a cost of £8,400 to the taxpayer to determine whether musician Sean Rigg 'spun in the back of the police van' on his way to Brixton police station after being arrested or 'whether his injuries could have been caused in some other way'.

The astonishing revelations were unveiled by lawyer Colin Reynolds who represented the officers and told an audience of Police Federation of England and Wales (PFEW) conduct representatives about what he described as an appalling catalogue of errors, delays and ineptitude demonstrated by the then Independent Police Complaints Commission (IPCC).

He accused the IPCC, which has now been replaced by the IOPC (Independent Office for Police Conduct), of putting the five officers, who were eventually exonerated in March this year, through an unnecessary ordeal resulting in some of them suffering from depression and PTSD, which also affected their wives and children.

"We must never ever let this happen again,” said Mr Reynolds, partner in Reynolds Dawson solicitors at first day of the PFEW conduct and performance seminar in Stratford-upon-Avon.

"We need a new approach, a new regime – it is difficult to find anything positive to say about the conduct of the IPCC in this case.”

Mr Reynolds continued: "One investigator asked the question: ‘what was a normal arrest in Brixton in 2008?’ Investigators were also obsessed with their ‘spinning in the van’ theory, hiring not only a breakdancer, but also a body mechanics expert, who, when he was giving evidence, said he felt badly briefed by investigators about what this was all about.”

He added: "I didn’t sign up when I took on this job to watch my clients, the officers, being destroyed. And that’s what happened in this case, the officers, their wives, their families, their children. It had such a damaging and debilitating effect on them."

In March this year, a misconduct panel finally cleared all five officers. The panel said that ‘members of the public were likely to be aghast’ at the length of the investigation which 'risked undermining confidence in the police conduct regime,' said Mr Reynolds.

Mr Reynolds added: "The death of Sean Rigg was a tragedy, and there was never a single moment that any one of my clients expressed any other view. But it was also a tragedy for the officers, who are now thankfully at the end of the process."

He said they were now exploring whether legal avenues were open to them to take action against the IOPC, to ensure the same thing cannot happen to other officers in the future.

PFEW is mounting a Time Limits campaign to try and end protracted drawn-out misconduct investigations, by appealing to cross-party MPs in a bid to secure regulation or legislative change.

Following the conclusion of the investigation IOPC regional director Sarah Green said: "As a result of learning from Sean Rigg’s case, we undertook a critical review of the way in which we investigated deaths following police contact, which has transformed the way that we now approach these investigations.

"We are working closely with the Ministerial Board on Deaths in Custody looking across the entire system, including the misconduct, coronial and criminal justice systems, to identify and eliminate unnecessary delay for those bereaved families who are seeking answers for the death of a family member.

"We recognise that timeliness is a priority and we are working hard to conclude a very small number of long-running cases which predate the IOPC."

IOPC Director General Michael Lockwood is due to address the seminar later today (22 May).