Blog: “Officers are better protected today as a result of the Federation” 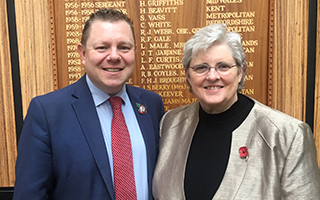 Jan Berry was the first – and so far only – female National Chair of the Police Federation of England and Wales from 2002 to 2008. As the organisation marks its first century, she reflects on the last 100 years.

I joined as a cadet in 1971 and qualified as a PC after two years - women officers were treated differently in those days. I became a Fed Rep, and it made me determined that other women officers should not be treated in the same way. In 1986, I wrote a guide for women officers on their rights in maternity. I realised that, in the Federation, if you had an interest in a specific area you could be quite influential.

Later I was PFEW Chair for six years. Negotiations with the government were always hard. When Theresa May was Home Secretary they were at their worst, but even under Jacqui Smith there were police officers working extraordinarily long hours and not being paid what they should have been. The then Police Negotiating Board (PNB) would agree a pay increase and the government wouldn’t accept it. I responded by campaigning for the right to strike – we didn’t want it but the government wasn’t giving us any alternative. I could have landed up in prison!

Somebody had a bright idea about a march in London. An amazing 20,000 officers turned out and I could not believe my eyes. We were wearing ‘Fairness for Police’ baseball hats and looked like a sea of white from above. We walked past the Home Office to applause from a school opposite and from Home Office officials. We finished at Central Hall where the Mayor of London and numerous MPs were there to meet us.

I am proud of being Chair of the Federation and for the opportunity to be a role model – to show other women that they can be a mum, wife, police officer and Federation Chair. I am also proud of the Federation for reaching its first centenary. That is no small achievement considering we were set up to fail. By having constables, sergeants and inspectors committees the government was able to play divide and rule. However, when the chips are really down and the organisation came together we achieved a lot, such as the 30 per cent pay rise in the 1970s – the Federation was key to that.

PFEW is important because we are there for officers when they need us. Officers are better protected today as a result of the Federation, we’ve prevented radical things from happening to policing by talking plainly and with common sense to the public. We have been the voice of policing in a way that the chief officers could never be – because we go out and say it like it is.