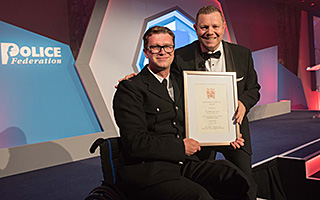 A Thames Valley Police officer has been named the first ever winner of the Inspiration in Policing Award at the national Police Bravery Awards, hosted by the Police Federation of England and Wales.

PC Tom Dorman was awarded the title at the 24th national Police Bravery Awards in London. The awards, sponsored by Police Mutual, took place on 18 July to honour and recognise police officers. The Inspiration in Policing Award recognises an officer or officers who have truly triumphed in the face of adversity and was launched this year.

PC Dorman was seriously injured when his stationary marked police car was hit by another car last September. Despite his injuries he managed to explain to a member of the public how to use a jumper as a tourniquet to slow the bleeding and close up the artery in his leg. Without doubt, Tom’s own advice to his colleagues and members of the public helped to save his life.

The officer braved nearly 10 hours of surgery and woke up to be told he had lost the lower half of his left leg. He underwent gruelling physiotherapy to learn to walk again, and in May took part in a triathlon. Despite his injury PC Dorman has been instrumental in changing the way first aid is delivered around the use of applying tourniquets.

John Apter, National Chair of the Police Federation of England and Wales said: "This new award is about celebrating and recognising those acts of moral bravery shown by police officers across England and Wales. PC Dorman is a very deserving first winner of the Inspiration in Policing Award. He is a fantastic example of someone who has triumphed over adversity, showing grit, determination and a strength of spirit that is a real inspiration to us all."