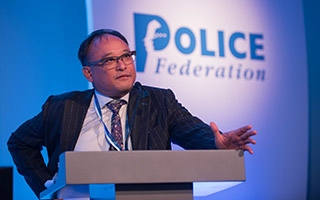 Day two of the event in Hinckley heard from Dr Meng Aw-Yong, Medical Director for the Metropolitan Police Service and past member of the Independent Advisory Panel on Deaths in Custody, and Dr Johann Grundlingh, a consultant and chief executive of SFR Medical.

Dr Aw-Yong called for more understanding of Acute Behavioural Disturbance (ABD) amongst healthcare staff, stating that despite it being listed as a medical emergency in the Royal College of Emergency Medicine’s best practice guidelines, it is often not recognised as such. Affected individuals may suffer sudden cardiovascular collapse and/or cardiac arrest with little or no warning. Often sedation will be required to prevent the onset of symptoms.

Dr Aw-Yong has been involved in six inquests where ABD was a factor and said that minimising the restraint time for someone at risk of the condition is vital. The use of Taser could be considered to help that. He said: “I am keen to protect officers, to avoid them having to grip the rail if there is a death in custody and the subsequent investigation. Even if that restraint was proportionate and there were other contributing factors, the coroner’s verdict will still come back that the restraint was responsible in part.”

He also spoke about the effectiveness of CT scanners to detect drugs and mobile phones concealed within the body and techniques that can be used, such as positioning the detainee forward when arresting them if officers fear they may have swallowed drugs or objects.

Dr Grundlingh presented on acid attacks, which had peaked in 2017 after a five year growth in cases, fuelled by criminal gangs. Delegates were shown graphic images of injuries and advised on the best ways of treating victims. He also spoke about his company, SFR Medical, which has carved out its niche in speeding up the transfer of medical evidence from the NHS to police investigators.