Blog: ‘I’m autistic, but I’m not a walking cliché’ 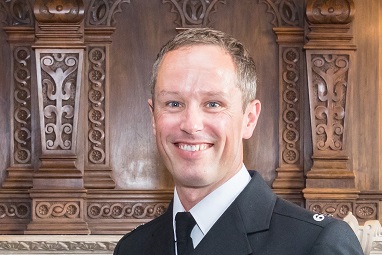 I have been part of the police force for nearly twenty years now: I joined the MET in 2001 and transferred to Avon and Somerset two and a half years later, where I’ve been ever since. I am currently the neighbourhood inspector for North Somerset. I was diagnosed as autistic in 2016.

As a note - I’m using the term autistic here because that’s the term I prefer. I am not someone ‘with’ autism, it’s not a bolted-on part of my personality. I am an autistic person, and treating me as a whole person, even just by changing the language, can really improve the conversation.

I only began to consider that I might be autistic when a young family member of mine was diagnosed- like a lot of people my age it was something that I was aware of but I thought it didn’t affect me. It turned out it affected me a great deal – when a family member is diagnosed, you get a booklet that lists the symptoms and what struggles you may have as an autistic person. I was looking through this booklet with my wife and we both agreed that a lot of what was listed there sounded like me.

To cut a long story short, I went to my GP and got referred to a specialist centre in Bristol where I eventually received my own diagnosis.

One big sign for me was my difficulty in communicating with people. I couldn’t always trust that what I was saying would be appropriate to the setting I was saying it in- not that I was being rude or inappropriate, but just that the things I’d say wouldn’t really match the context of where I was. I came off a bit odd, and sometimes I unintentionally offended people.

I’ve lost count of the things I’ve said or done, pre-diagnosis, that lost me friendships, invitations to nights out, working relationships. It was really isolating and led to a pattern throughout my policing career where every time I joined a team, people would slowly begin to realise unusual things about how I interacted and I’d end up being isolated.

Finding a reason for this was a huge relief, but shortly after I was diagnosed, someone asked me if I was going to tell anyone. I hadn’t really considered that I wouldn’t- it’s important stuff, after all. However, there’s lots of good reasons why people choose not to be open about their diagnoses. There’s still prejudice and fear out there, and a lot of people have unhelpful preconceptions about autism that make the lives of autistic people difficult.

However, I felt that for me, I wanted to be open about it. The reason was very simple. For a lot of autistic people, including myself, life can be very tough. I’d always known there was something different about me that made my life harder, and now I had a label for it – I was autistic! Now that I knew what it was, I wanted to talk to people about my experiences and help them understand autism.

One of the places where I express myself best is in the written word, which is why I have such an active Twitter presence. I really enjoy being open about my diagnosis and I love talking about it. I hope that by doing this, I can encourage people to be open about their own neurodiversity and see that there’s places for them.

I also want to show that I’m not a walking cliché. I’m terrible at maths, for example. Autistic people are as diverse as any other group, and to reduce us to one or two traits is really unhelpful.

I can honestly say that being open about my diagnosis is one of the best things I’ve ever done. I feel much more able to be myself, both at work and at home.