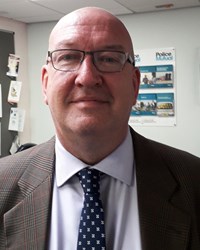 Over the last year, stress has become more of a part of our daily lives than we ever imagined - making April’s Stress Awareness Month perfectly timed.

According to the Mental Health Foundation, 74% of UK adults have felt so stressed at some point over the last year they felt overwhelmed or unable to cope. In policing, these figures are replicated almost exactly. PFEW’s recent Demand, Capacity and Welfare survey found that 77% of respondents acknowledged having experienced feelings of stress, low mood, anxiety, or other difficulties with their mental health and wellbeing over the previous 12 months.

To mark Stress Awareness Month, Phil Clark, Chair of Lincolnshire Police Federation, explains how he has dedicated his career to helping colleagues move forward beyond crisis point and putting them in touch with the resources and support PFEW has available.

Even after almost half a century, the next sentence is a tough one to write. My dad was a cop in Lincolnshire and took his life in 1974 while on duty - I was six at the time.

Due to the cultural attitudes towards suicide at the time my twin brother and I didn’t find this out until we were 16. I do however recall the impact his death had on my early life in the form of visits the family received from his colleagues and dedicated welfare officers, and the support we had in terms of Federation assistance, Christmas hampers, trips to the football, birthday presents and so on.

It was only when my marriage ended, and I found myself in a dark place, that I began to reflect on the reasons why my dad may have taken his own life. Fortunately, in my case I was able to take advantage of the support of colleagues, including the FME who directed me towards my GP and medication. Having reluctantly sought advice and assistance I was able to function effectively and care for my two young children who resided with me. In 2011 I applied to be a hostage and crisis negotiator (90% of this role involves talking to people in crisis) drawing on my own experiences and awareness to offer support to those really struggling with their own personal circumstances. I use the techniques involved daily when supporting and representing members. The critical feature of the approach is to listen.

As my career progressed and I matured personally and professionally, I increasingly thought of my dad and other officers who had taken their own lives. I was not aware of any officer reaching out for support in such circumstances and in my father’s case, such provision around mental health did not exist. These considerations encouraged me to become an advocate for improved mental health awareness and led me in the direction of the PFEW. I became a Fed rep in 2012 and, early last year, Chair of the Lincolnshire branch of the Police Federation. I was committed to driving progress in relation to psychological wellbeing and the support in place for members in the absence of an effective Force response.

As I began my duties as a Fed Rep, I saw there was really nothing in place for cops at crisis point. Having first qualified as a mental health first aider and having worked with MIND as a Blue Light Champion, on becoming Chair I ensured that the mental health provision for our members was accessible and effective. I’m also a trustee of the Police Treatment Centres in Harrogate and Auchterarder- having attended their Psychological Wellbeing course I can unequivocally recommend this as a means of identifying and coping with mental health concerns.

Dealing with officers struggling with their mental health has become a daily business for the Council. Recently, I had one officer referred to me by his sergeant after he’d told her he wanted to move from his current role. She thought there was more to it, and when I met him it was obvious there was an issue. He was anxious and unkempt and presented as really unwell. He disclosed that after years of struggling with trauma, he’d reached a point where he couldn’t see a way out.

We were able to help him see that he was unwell and not isolated, and that there were options available for him - medication, counselling, a visit to a Police Treatment Centre, and the opportunity for chats in the office. It hasn’t been an easy ride for him, but now the support is there so when he does reach a crisis point, we can see him through it.

Another officer came in to tell me about a problem he was having, and halfway through he started to tell me about how he was sure he was being followed. I was able to sit there with him and call each department who had a surveillance capacity to reassure him nothing was going on. This provided the reassurance for him to feel able to reveal further details of his condition.

He felt I must have thought he was mad; however he was clearly mentally unwell and at the point of exhaustion. We encouraged him to go and talk to his GP and were able to get him into counselling then back to work. Only later did he disclose that on the very day he’d talked to me, he had some very dark thoughts and, as a last resort, thought that he would engage with Fed office before acting on these.

These positive cases show that we can have a have a genuine impact on our members. The key is to help people understand why they feel as they do, recognising they’re unwell, and helping them go forward and seek some assistance. I am acutely aware that this situation is similar across all Branch Boards.