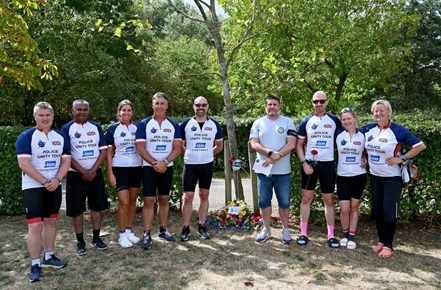 There was emotion and humour as police officers who have died on duty were remembered by their family and friends at the Care of Police Survivors (COPS) Annual Service of Remembrance.

Surviving family members and serving police officers gathered at the National Memorial Arboretum on Sunday August 21 to pay respects to officers who have made the ultimate sacrifice.

The service in Staffordshire – bathed in glorious sunshine – was attended by more than 800 people.

Adam Commons, Chair of Leicestershire Police Federation said “When you arrive at the service and you get to see the families and you meet some of them, and you hear their words, you realise how important it is, what COPS the charity does, and what it continues to do. It needs to be there, so we need to continue to support it. Seeing the difference it makes, and hearing it today, is why we’re doing it and why we keep coming back.”

During the 45-minute service on Sunday, survivors recalled their loss and how the charity had helped them in their time of need.

The Roll of Honour for the police officers and who died on duty during the last 12 months was read out.

Before the Service of Remembrance, The Police Unity Tour – over 300 cyclists who had ridden from across the country to the Arboretum in memory of fallen officers - arrived. The cyclists raise money for the COPS charity.

Adam added “I’ve been support van for the Chapter 9 Unity Tour, which is East Midlands, Leicestershire, Derby and Notts. We’ve had about 38 riders, which has been amazing. And we’ve had the weather, so it’s been fantastic for them. They’ve had a better ride because it’s been sunny, so we’ve just been making sure they get their breaks, their drinks when they need one, and looking after them as much as we can. It’s just another important thing to support them, because what they’re doing is amazing. They’re raising a lot of money for COPS, they’re training hard, it’s just phenomenal and it’s important we support them, which is why we’re here.”