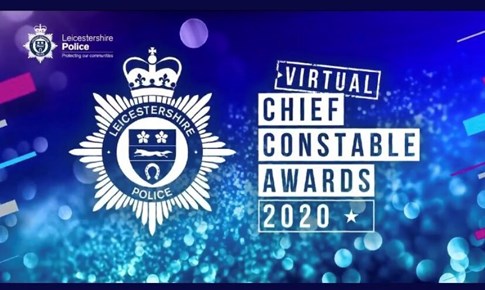 Officers celebrated at Leicestershire Police Virtual Chief Constable Awards
Last night the Leicestershire Police Virtual Chief Constable Awards 2020 took place, presented by Chief Constable Simon Cole and the Deputy Chief Constable Rob Nixon.
Adam Commons, Chair of Leicestershire Police Federation said: “I was honoured to be invited to the Chief Constable’s Awards 2020.
“The event was held a bit later than usual due to the Covid pandemic and for the first time was a virtual event.
“Even though it was virtual it was clear a lot of planning and care had gone into it, and it was superbly presented.
“There were so many awards and all of the winners were deserving of being recognised.
“We had the pleasure of sponsoring two of them, The PRT Officer of the year won by PC Thai Mahmood, and the DNO officer of the year PC Davey Rawlings.
“One of our own Federation Reps, Shauna Ashton, also won an award with her team being awarded the Catherine Godfrey Trophy for PRT Team of the Year.”
Other winners included Chief Inspector Manjit Atwal QPM for the Diversity Award, PC Reece Pollard Student Officer of the Year, SPC Jamie Trusler for Special Officer of the Year and many more.
Adam said: “We were also shown the Team Leicestershire video presentation – I challenge anyone to watch it and not feel incredibly proud to be part of the Team.
“Of course these awards are just the tip of the iceberg in Leicestershire, we are part of an outstanding Force and hearing some of the stories from last night should make us all proud.”
Congratulations to all the winners:
Sgt Insp James Blackburn won Volunteer Leader of the Year.
Lynn Ashton won Saville Trophy Volunteer of the Year 2020.
PC Thai Mahmood winner of Patrol and Resolution Team Officer.
PC Reece Pollard Student Officer of the Year.
Police Cadet Matthew Hares Police Cadet of the Year.
SPC Jamie Trusler won Special Officer of the Year.
Chief Inspector Manjit Atwal receiving Diversity Award.
The Biometrics Team won Volunteer Team of the Year.
City Centre Beat Team won Beat Team of the Year.
PC Davey Rawlings won Neighbourhood Officer.
Leicester City Police won Dedicated Neighbourhood Team.