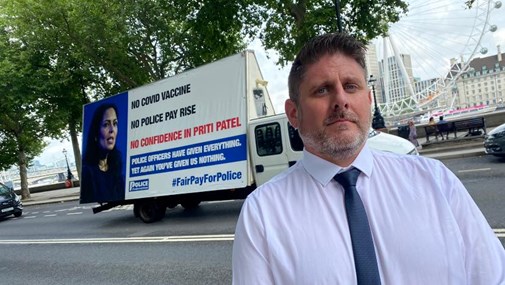 “Police officers have given everything. Yet again, the Government has given them nothing”

That was the message taken to the heart of power today as police officers from across the country came to Westminster to voice their fury at their treatment by the Government.

A huge billboard carrying the message “No Covid Vaccine. No Police Pay Rise. No Confidence in Priti Patel”
accompanied the officers at it reminded those working in The House of Commons, The Home Office and 10 Downing Street of how the Government has betrayed the country’s hard-working police officers.

Brave colleagues who risked their safety – and sadly that of their families – as they kept people in the country safe over the last 18 months of the Covid-19 pandemic were last week awarded a 0% pay rise by Government.

Adam Commons, Chair of Leicestershire Police Federation, said: “Enough is enough, we have been taken advantage of for too long and the disgraceful treatment of our members will not be tolerated.

“In the last 18 months my colleagues have courageously worked through the pandemic, in the process being spat at and assaulted despite the fact they were ignored in the vaccine roll out.

“They should have been considered for a pay award and the Government saw fit to intervene yet again.
“The police service still runs on a large amount of goodwill. If my colleagues decide to start following Police Regulations to the letter, very quickly you would see an impact.”

Adam added: “It was hugely important that we followed up our statement last week with a message that is loud and clear and will resonate through Government. We meant what we said and we are not going away.

“The silence from the Home Secretary has been deafening, and as we saw at the weekend the Prime Minister is planning new processes that he has not consulted on, using the familiar warm words about my colleagues.

“This is just the beginning and I believe there is a long road ahead. But I’m willing to do whatever is necessary to ensure our members receive the support they deserve, and a pay review mechanism that is truly independent and fit for purpose.”