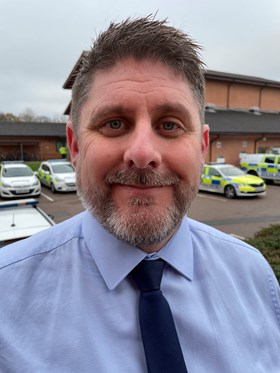 Adam Commons is the new Chair of Leicestershire Police Federation – and is planning on regularly highlighting to the county’s MPs the policing reality colleagues face out on the streets.

Adam, who has been a police officer for 20 years, has been Vice Chair of the Federation for two years and says he can’t wait to get started working hard to represent the best interests of Leicestershire Police Officers.

He said: “I want to maintain the excellent relationships that have been built up in our force”

“I also want to look at how we interact with our members, and the ways that we find out their views and what they need from us.”

Another priority for Adam is to encourage all police officers to sign up to the Leicestershire Police Federation Group Insurance Scheme. He said: “It’s an important product that I think every police officer should have. There are so many benefits that are far ranging from sick pay cover to motor breakdown it is incredible value for money”

In his role as Conduct and Performance Lead, Adam said he wanted to continue to put pressure on the Independent Office for Police Conduct to make changes in line with the PFEW’s Time Limits campaign, which is calling for an end to lengthy investigations into police officer actions.

He said: “I’m dealing with IOPC investigations that have been going on for longer than they should have been. Locally we have an excellent relationship with our professional standards department that previous Chair Dave Stokes has developed over time, and it’s something that I want to continue and build on.”

Speaking to MPs will also be one of his first tasks, Adam said: “I want to increase our engagement with some of our local politicians because of the benefit it brings for our national campaigns.”

He added: “I thank Dave for his hard work since he took over as Chair, and we’re lucky to retain him on the board going forwards. I wish him luck in his new role with the force.”